Welcome back to the Component Series. We hope to help builders both new and old to understand their options when it comes to the components in their custom water loops. Today we’re going to veer from our usual course and take a look at the middle ground between custom water cooling for your PC and air cooling – all-in-one water coolers, or AIOs as they’re commonly called

AIOs bridge the gap between air cooling and custom-loop water cooling. They’re a common jumping-off point for people who want the benefits of liquid cooling for their PC but aren’t ready to dive into the complexities of true custom PC water cooling. 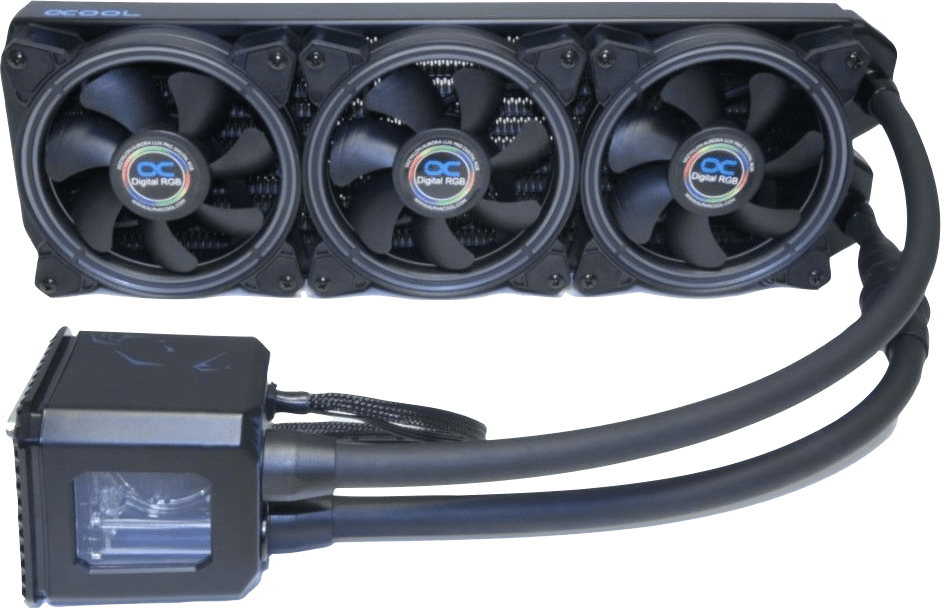 All-In-One cooling units work exactly like a custom water cooling loop on a smaller and easier-to-use scale. They consist of the same parts: pump, water block, radiator, tubing and fans. AIOs are available with several different sizes of radiators to manage different heat loads. The pump is almost always built onto the water block as a unit, and circulates heated liquid to the radiator to be cooled before returning to the heat load to start the cycle over – again just like a custom water-cooling setup.

The big difference, and the reason for their name, is that AIO units come completely pre-assembled and prefilled as standalone units.

The self-contained nature of the AIO is the reason for their popularity. They offer better cooling than typical air cooling with a lower noise threshold, without the expense and complication of a custom water cooling system. They really are the perfect compromise between air and custom liquid cooling.

So, having an idea how all-in-one coolers work and why there are so many of them out there, let’s ask a few questions and look at the answers.

Are AIOs better than air cooling?

That really depends on what sort of “better” you’re looking for.

While it’s possible to find high-end air coolers that will compete with low- to mid-range AIO units, a premium AIO will always cool more effectively than an air cooler.

AIOs are typically quieter than air coolers out of the box. Part of this is the ability to run the fans at lower speeds due to the increased cooling performance.

With the included radiator and tubing, an AIO will take up more space than all but the largest of air coolers.

Value is subjective. If performance and noise per dollar spent are important then a good AIO will almost always be a better value.

Are AIOs as good as custom water cooling?

We’re going to run into the same issue with “as good as” that we did with “better”.

AIOs excel in a few areas when compared with custom water cooling, but performance is not one of them. Outside exotic phase-change cooling, a good custom liquid-cooling system will give you the best cooling performance for your PC.

Ease of Use: Better

One of the areas that AIOs excel is ease of use. It’s one of the main reasons that people will decide to get one rather than jump into a full custom water cooling system. They come from the factory with a special coolant mix that includes anti-corrosives and biocides to prevent growth in the system. Most also come completely sealed, never meant to be opened, topped off or maintained in any way other than the same external cleaning needed by an air cooler.

Again, value comes down to what you’re looking for. If you want a simple solution that will keep your temperatures under control, an AIO is definitely the better value. 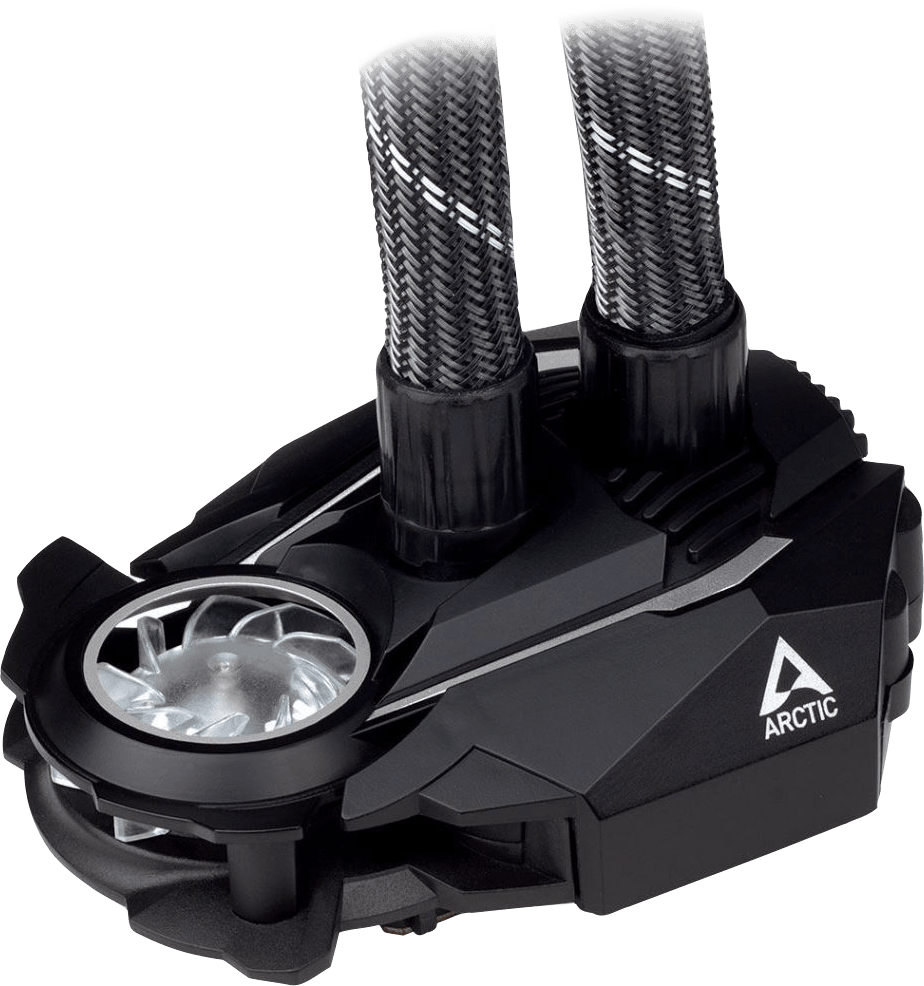 Are AIOs difficult to install?

Installing an AIO unit is similar to installing an air cooler. Like any PC cooling solution, each one is made to fit specific parts, whether it’s certain CPU sockets or a specific graphics card. To install it, the block is mounted onto the component, typically with screws, and the radiator is mounted to a point in the case within range of the attached tubing. The pump and fans will usually run off of fan headers on the motherboard, so no external power is needed.

There are a few brands in today’s market that offer expandable AIOs. While these install and function just like other AIO units out of the box, these are designed to be opened and expanded with other components, just like a custom water cooling loop. 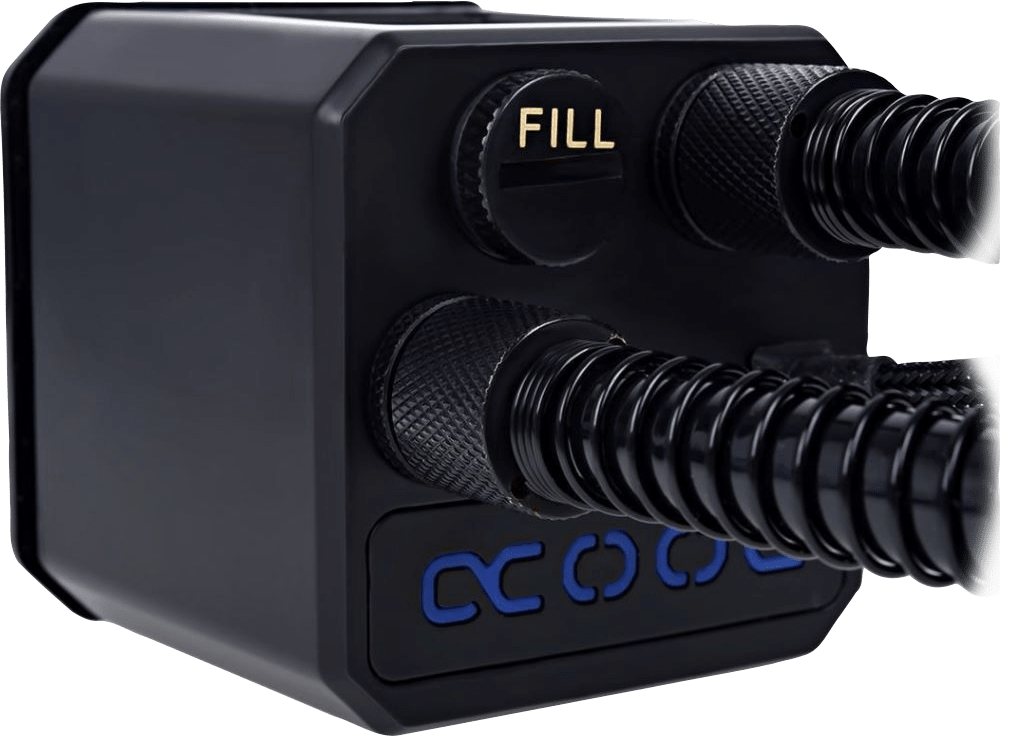 They feature removable fittings on all of their components, fill and drain ports for coolant, and in some cases even have reservoirs with clear viewing windows. These are the closest thing to a true custom water cooling loop and can be a good starting point to building one.

Orientation and What It Can Do

Any time you’re working with liquids gravity plays a part. The sinks in your house are built above the drainage lines for that reason, and the drainage lines themselves will slope downward toward the main sewer exit. In the absence of mechanical force, water will flow downward. In an open water system like a fountain pond for example, gravity returns the water to the pump to be cycled through the system again.

In a closed-loop setting like a PC, your pump keeps the coolant flowing through the system for countless cycles – gravity isn’t needed. It does still play a part however.

Just like custom water loops, all-in-one coolers contain a small amount of air. This is necessary for compression as temperatures rise. Air will compress without complaint. Water has a much harder time doing it, and can go as far as popping fittings off of tubes if pressure gets too high.

In an environment of air and water, air will always go up, collecting in the highest point it can reach. That’s normally not a problem, but it’s possible to install an AIO in such a way that the air makes its way to the pump. That’s bad. Modern pumps are amazing and move fluids extremely well. They won’t move air at all, and running them without being submerged in fluid can damage them.

With that in mind, here are a few different mounting orientation options for your new AIO – note on each one where the air in the system ends up. 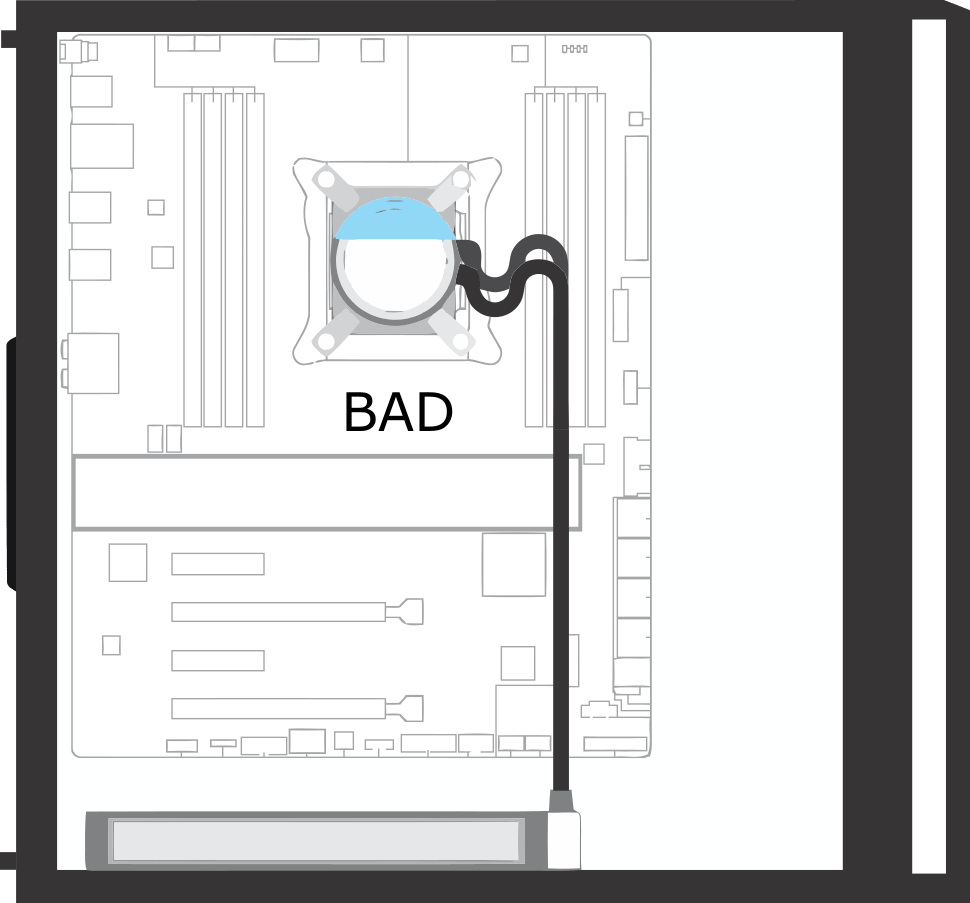 In this case, the pump is the highest point in the loop. Air will collect there. Bad. 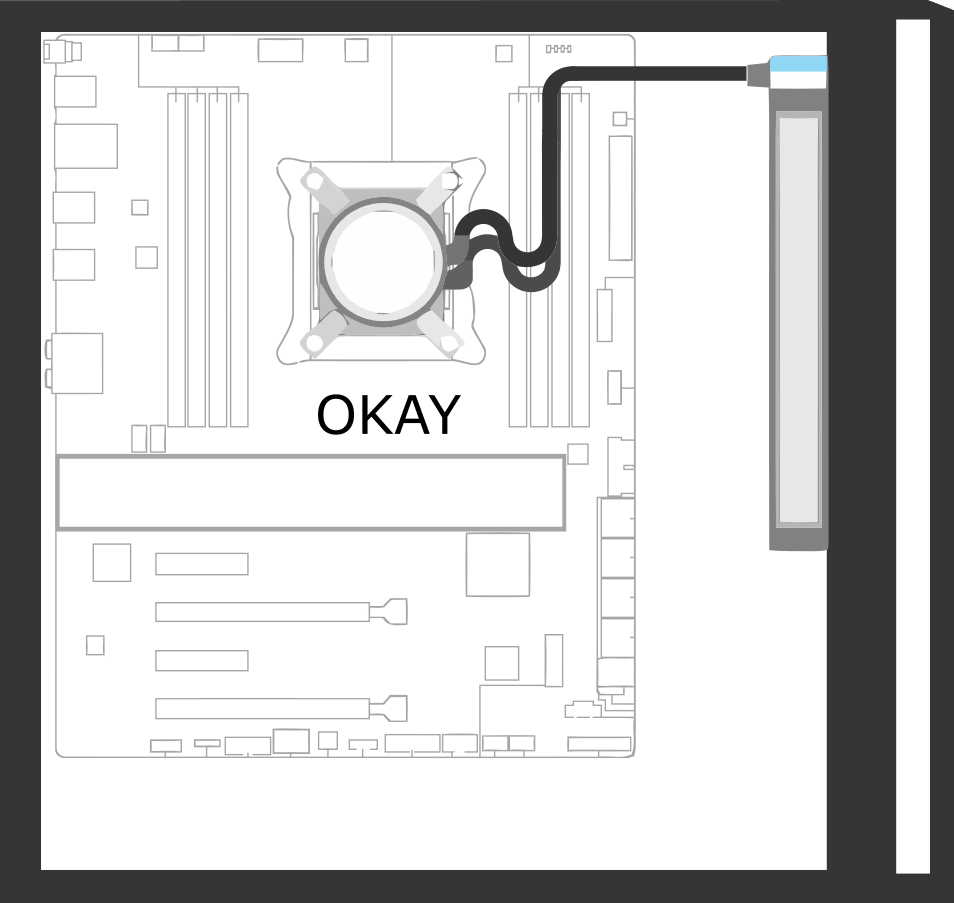 This position is better since the air is eliminated from the pump, but the air pocket that does collect can interfere with coolant flow. 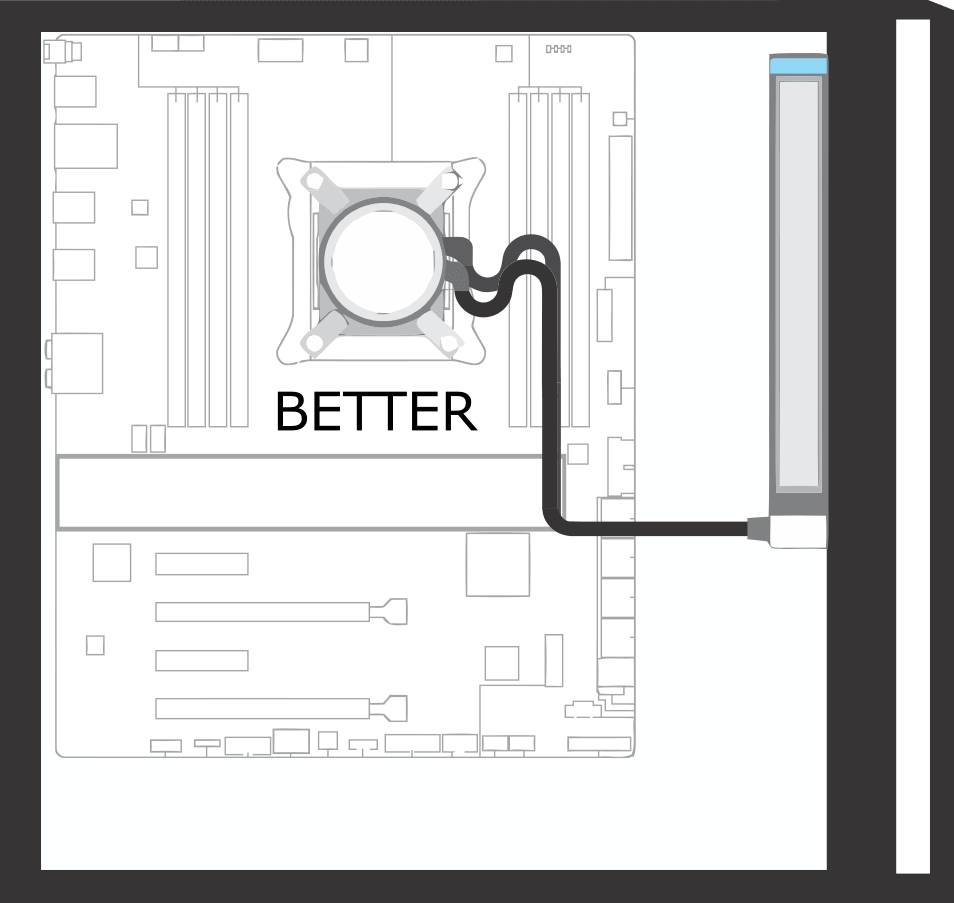 A top-mounted radiator is always best for AIO placement. The air in the system will be distributed across the upper portion of the radiator. This orientation is least likely to cause flow issues and will ensure the longest life possible for your AIO.

What About Horizontal Motherboards?

If you have a cube-style or open-air case that has the motherboard mounted horizontally, the same rules apply – keep the pump below the radiator.

Here again, this mounting position works unless and until the air pocket gets large enough to impede coolant flow.

Just like a vertically-mounted motherboard, placing the radiator horizontally above the pump is ideal.

Should I Get One?

Like most of the technology behind PC cooling, we’ve seen large advances in All-In-One units since their inception. Their performance and variety have continued to improve, and the market is packed with options. If you’re considering taking the plunge into liquid cooling, an All-In-One cooler can be an excellent place to start and can serve as a lead-in to your journey into full custom water cooling.