It’s time for the next Featured Rig from Titan Rig! We are please to showcase Featured Rig #7 by Daniel De Oliveira of @sffbuild on Instagram! Small form factor PC builds have been a popular trend these last few years, but Daniel's creation takes "SFF" to a whole new level. With a full size ATX motherboard, a 3 slot RTX 3080, and a massive 560 radiator, this is as extreme as "small" form factor gets! 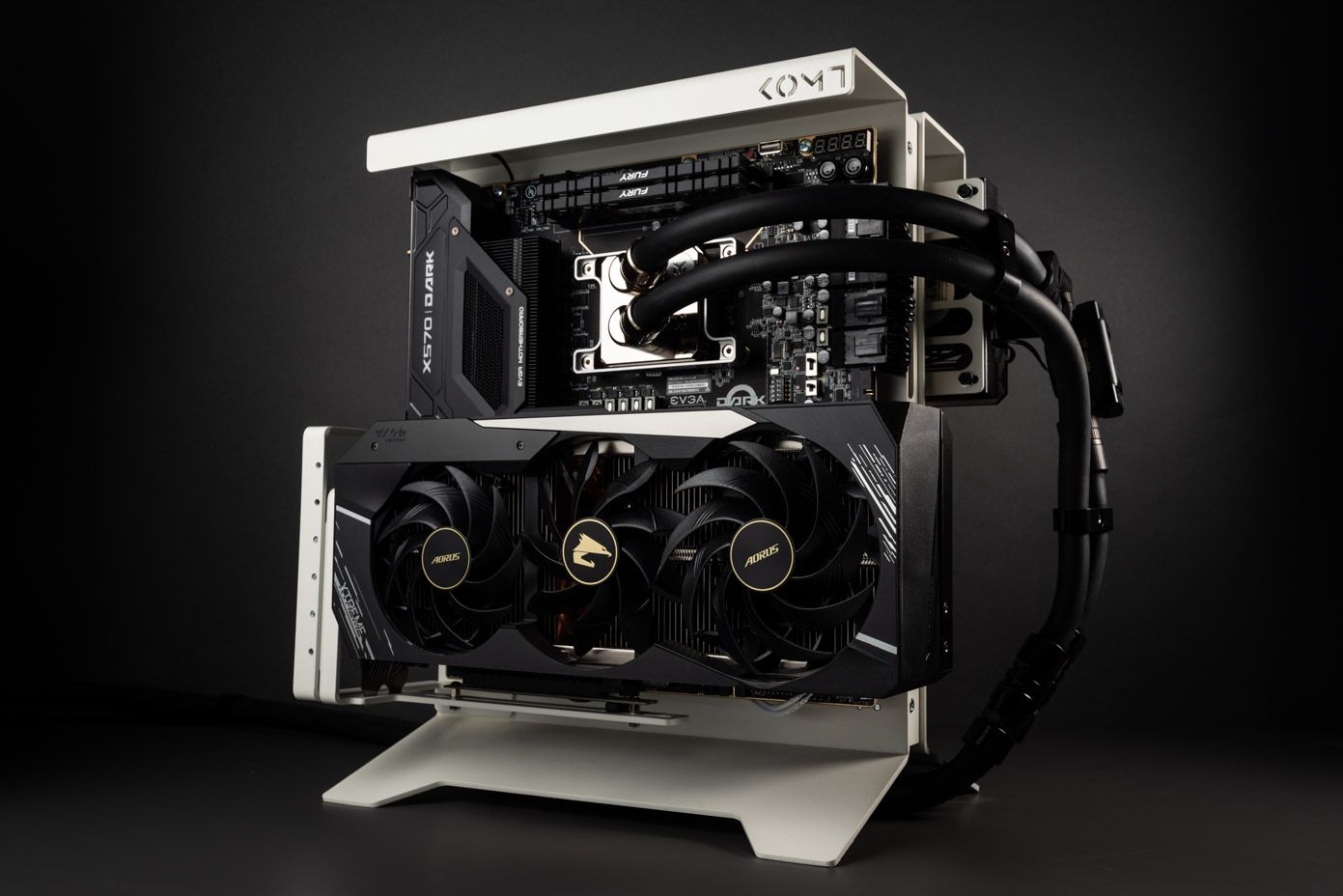 This is certainly a unique project. Does it have a name?

Its an honor to be featured, thank you. I surely feel it’s a special project, which I code named Aggron, after a behemoth sized cool looking steel Pokemon because, well I guess it’s because I grew up in the 90’s…

The combination of the smaller form factor of the case and the large external radiator seems to be getting more popular. How is it working out for you?

I agree with you about the trend and I love seeing itty bitty computer cases next to massive radiators. It’s oddly satisfying and I hope to continue to see more of it. In practice though, using an external radiator is an awesome solution, the system as a whole is more quiet and cooled incredibly well, it’s totally worth it.

I hadn’t seen this case before your build came to us. How did you decide on the Magnus for this build?

Well this case is very unique, and I’ll tell you why.

A friend of mine from Bulgaria designed this case in a way that really caught my interest. He wanted to create a case that could support a full sized EATX motherboard while hitting some of the same beats of the SFF design mantra. So he designed the Magnus, which means ‘big’ in Latin, to have a thoughtful layout minimizing the case’s foot print while maximizing the utilized space to accommodate powerful components.

In short, I fell for the case the moment I saw it and my buddy over at Kompcase custom painted it for me. I thought it was perfect for this build. The hardware I used is just… BIG and this case put it together optimally. And I mean just look at it, it’s a great case to showcase your hardware. 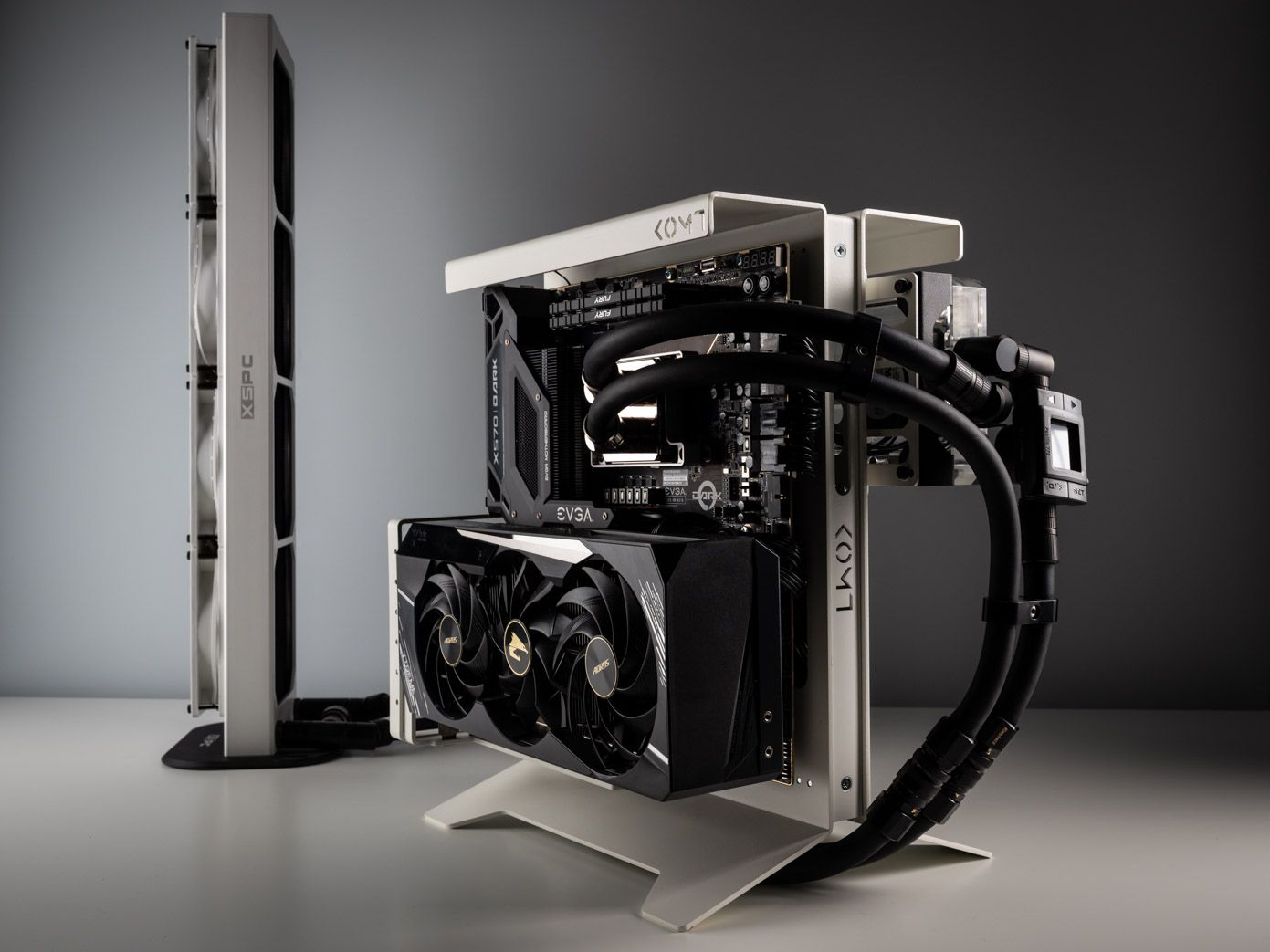 It really does show it off well. What kind of work will your PC be doing for you?

I’m glad you asked, and I feel like it can handle any kind of punishment, I mean “work” you throw at it. I manly intend to create content of all sorts and play games from all decades…

How long have you been building PCs?

Since the dawn of January 31st 2018 — yeah, not very impressive I know, just a few years but I am just getting started alright…

Well, you’re off to a great start! How did you get started with water cooling PCs?

Like most, I would imagine, it started as a personal challenge to see if I would even have the ability to just do it. And the first step was simply, try it to see if you can.

I had a Ghost S1 build at the time, which was my first SFF case, but I wanted to push the envelope and bring the cooling concept I had in mind to reality after being bored with the build’s air-cooled solution. And so I did and it worked, though eventually I went back to the more basic air-cooled solution for that build, it was a fun ride. 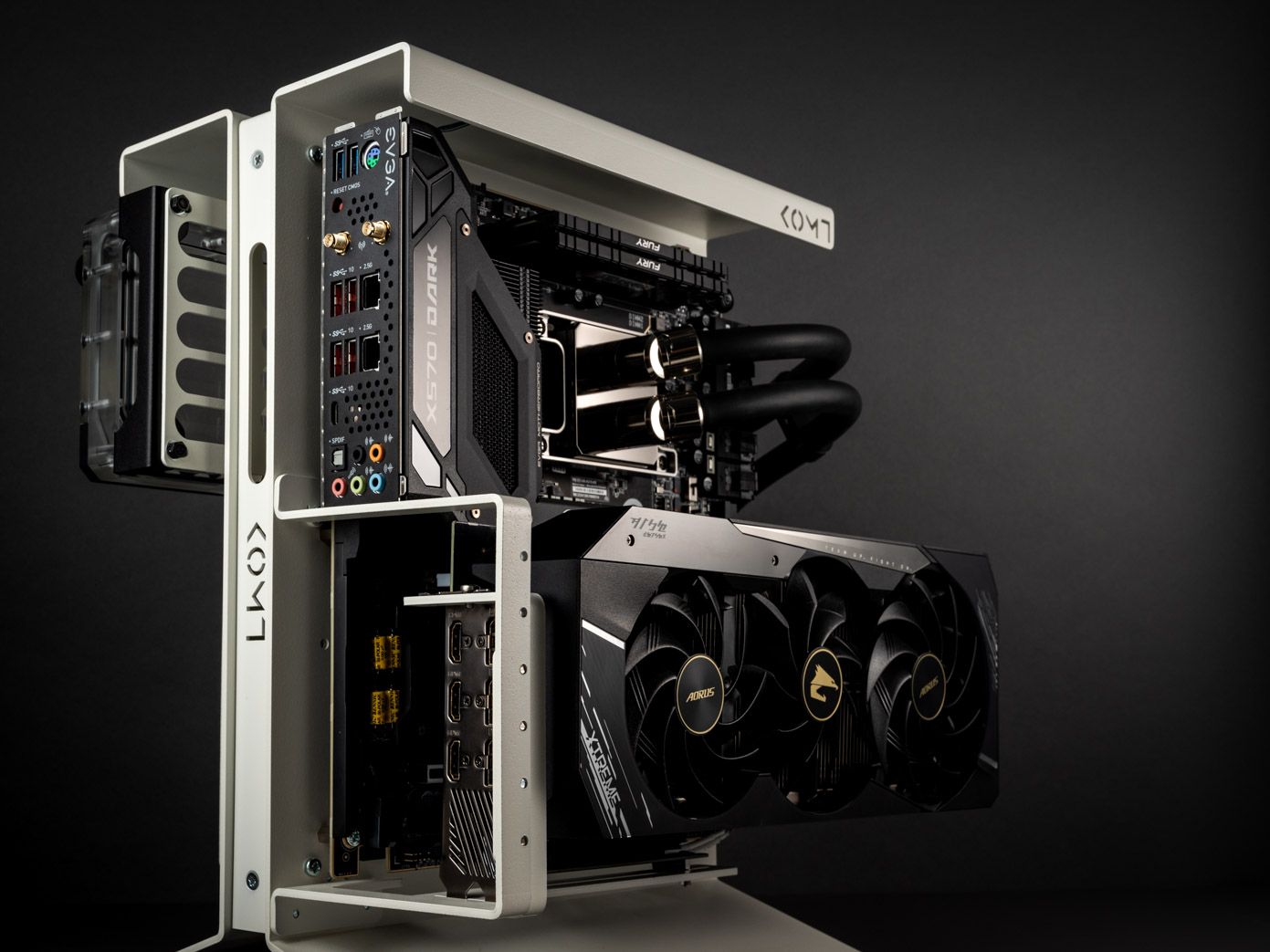 What made you decide to go with water cooling for this one?

For this project, the deciding factor was AMD’s toasty 12 core 5900x. I mean this chip naturally runs warm while idling and I wanted it to chill that warm mug of coffee as best as I could because I preferred my brew cold. Shout-out to all the iced-coffee drinkers out there.

Your loop is substantial, especially for a single CPU. What are your temps like?

Yeah I agree, though the EVGA x570 Dark motherboard in use is also substantial to match the loop’s cooling potential, together with AMD’s chipset they make a serious team.

Funny enough, after overclocking, the system sustains higher boost clocks for longer periods when it is undervolted with precision boost overdrive. Resulting in incredible temperatures under load, like not going over 65C after long gaming sessions at 5.0 GHz all cores… 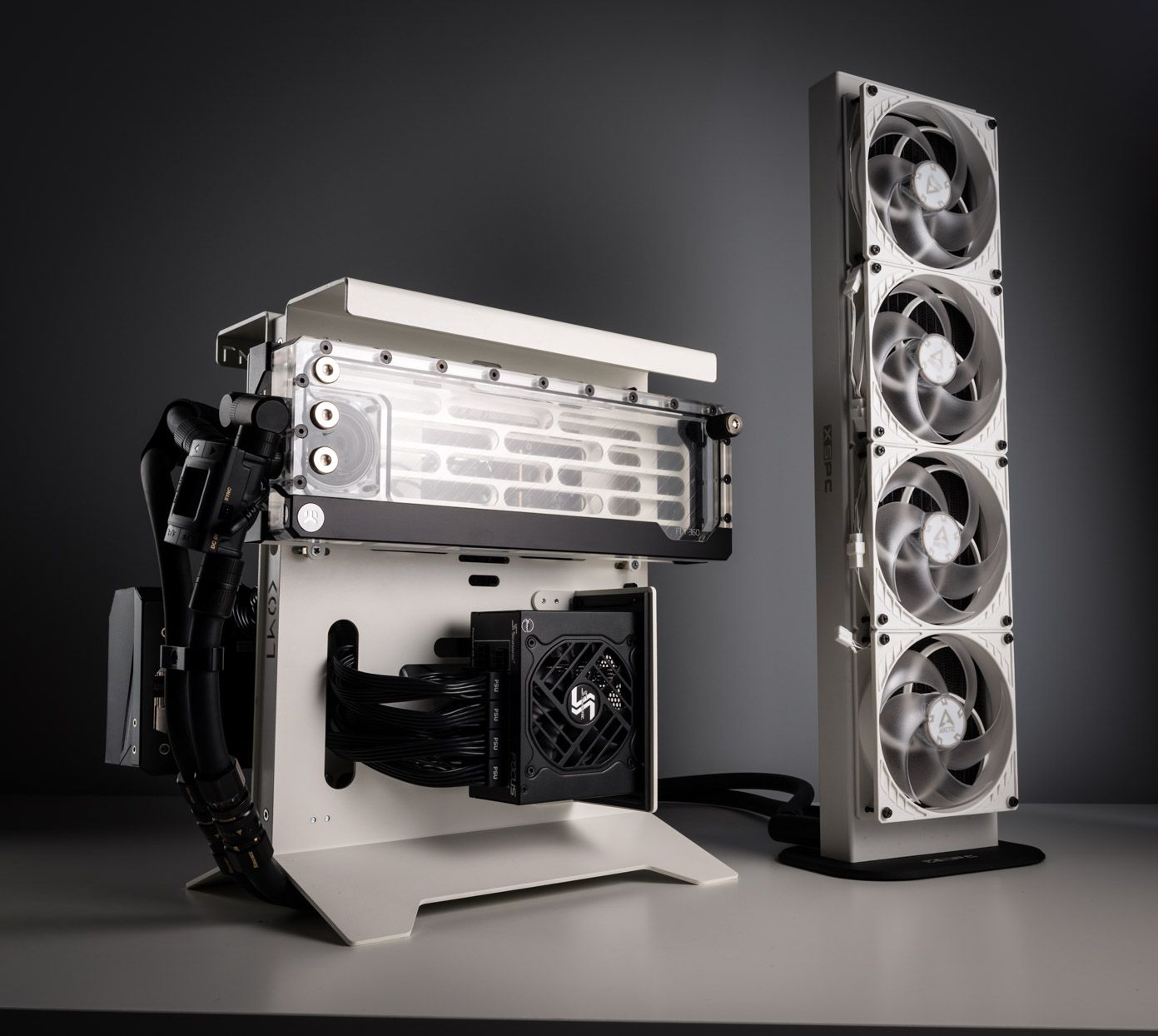 Why did you decide not to water cool the video card?

Because of its gigantic designed cooler with its little LCD screen on it. I mean come on, how much cooler can it be?

It IS pretty cool! I like the separators on your soft tubing. Are those automotive parts?

It really helps keep things together tightly I feel, but I’m actually not sure. I found them on the internet (Amazon). They are pretty neat, come in different sizes and colors, they actually may be for cars.

Your indirect lighting is on point. Is that an option that comes with the case?

Thank you, that was merely accidental I have to admit. But no, it isn’t an option that comes with the case. Actually though now that you mention it, it probably should be.

In my case, I just picked up and used a simple RGB LED strip. In regards to the lighting though, I did want to step back from using RGB ram while still wanting to light the beautiful EK waterblock components along with the “heart” or central area of the build. So I decided on some RGB in a hidden or indirect way. I was actually really surprised the “DARK” motherboard had RGB lighting on it, good thing it’s minimal which is tasteful, but it seems ironic, no? 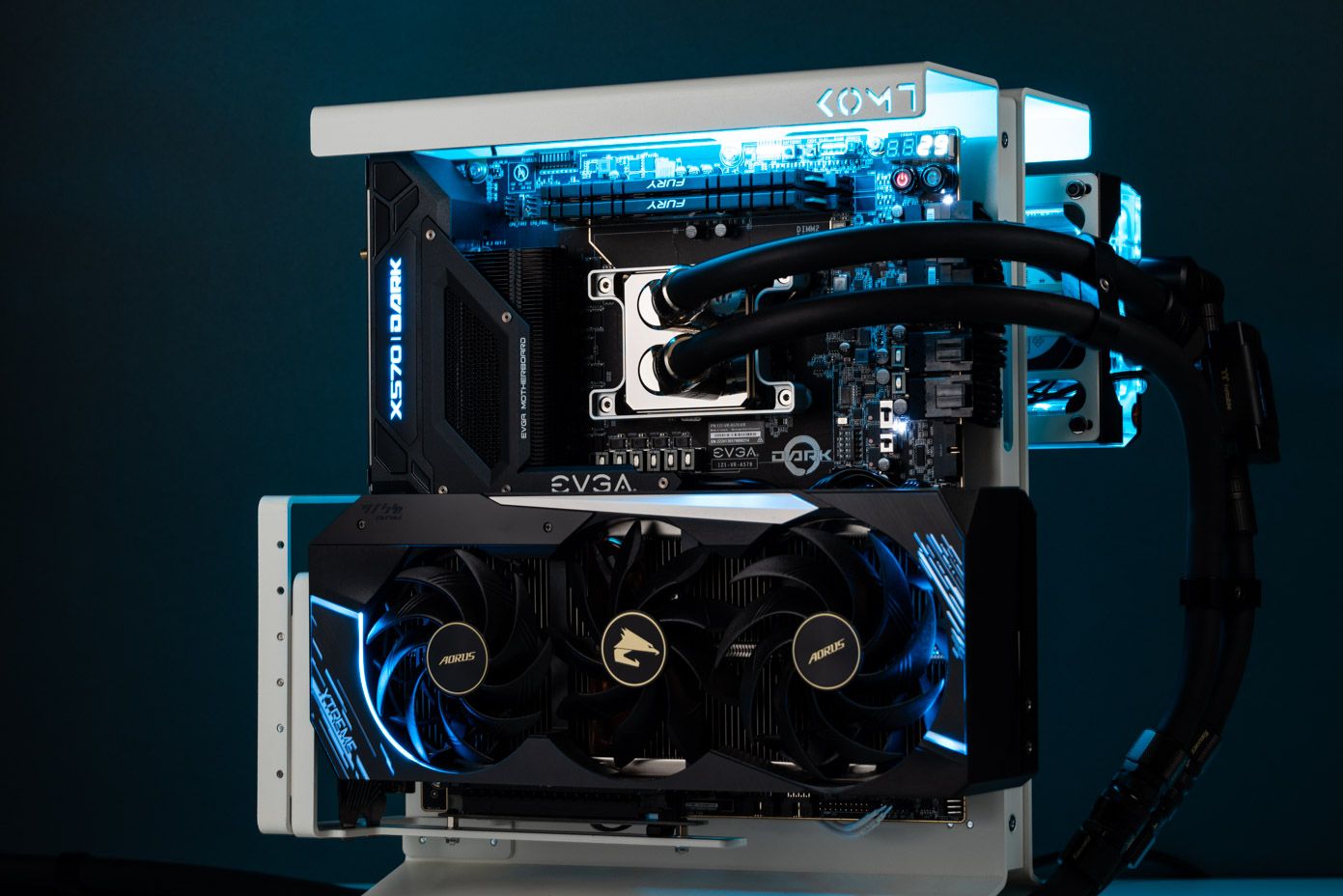 What problems/issues did you run into with this build?

This build went pretty smoothly. The only notable problem I can tell you about is the coil-whine I dealt with a different graphics card I installed.

You see the non-issue I had with this system was that I built an incredibly silent rig. So when it came to deciding which GPU to use, I actually tried installing a 3090 Founder’s Edition model and I was shocked.

You have to imagine this card is pretty much next to my ear, within arm’s reach and the rest of the system is whisper quiet. So when I stressed tested the 3090 I was amazed to hear not only the two fans but a surge of high-frequency buzzing that will make the sound of nails through a chalkboard seem like bliss. Man, I tell you it was bad. I couldn’t handle it for longer than a few seconds, so I had to use a different card.

I’m really happy with the AORUS 3080 Xtreme, this card is thicccc with four C’s to match how many slots you’ll need for it but it also has a near-silent operation volume with very minimal coil-whine under load while sustaining high boost clocks.

Glad you got that problem fixed! Would you do anything differently if you did it again?

Absolutely, I mean with “if’s” you can put Paris in a bottle so they say. If I had all the money in the world and a bit of black magic I would upgrade all the components essentially and use only white color-themed parts to match the case but the layout would stay the same.

Any advice for the aspiring water cooler?

Listen to the corporate overlords, like Nike and just do it.

Thank you kindly for your insightful questions, this was fun. 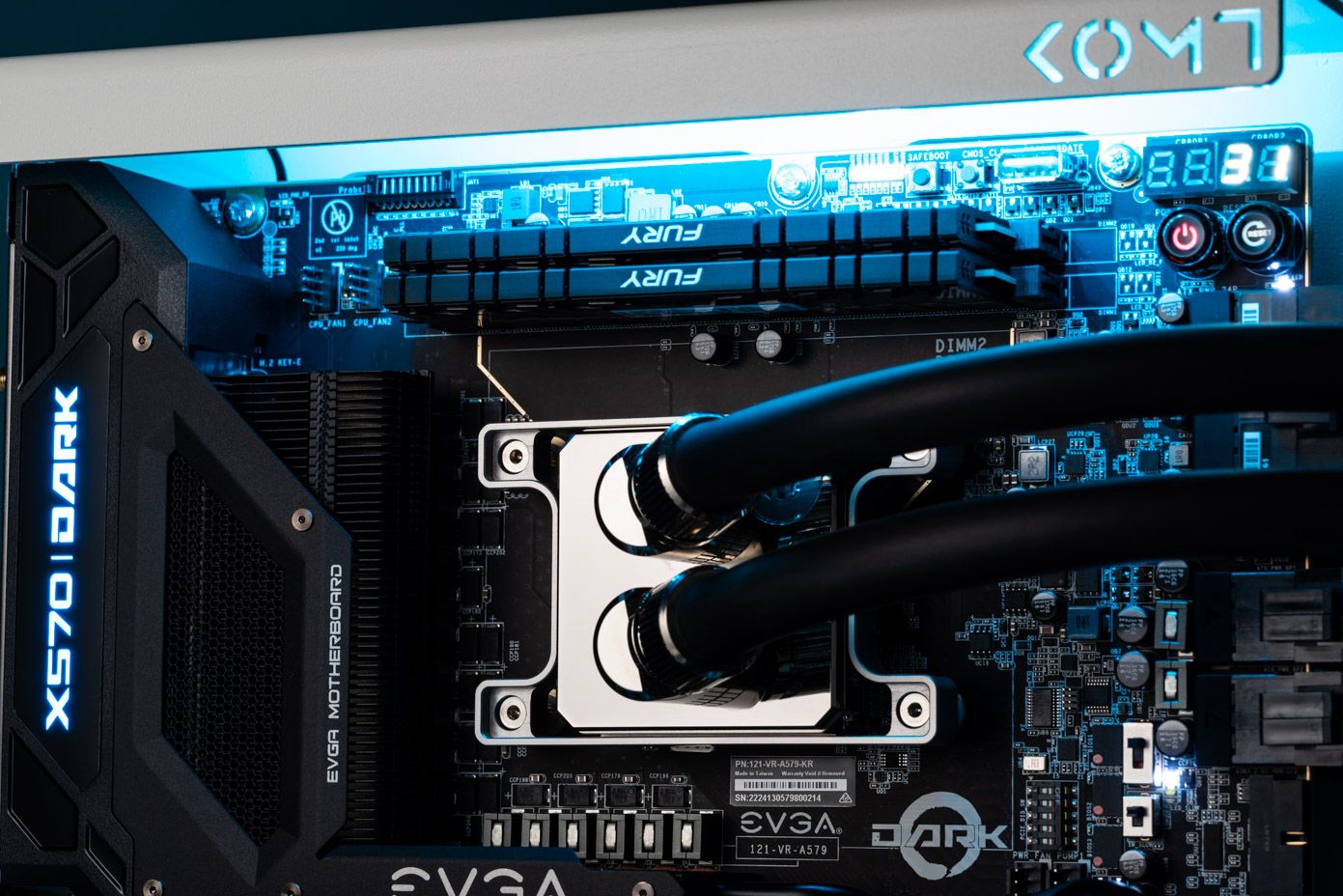 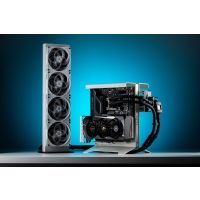 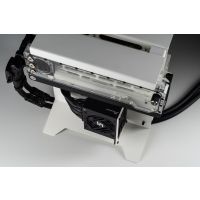