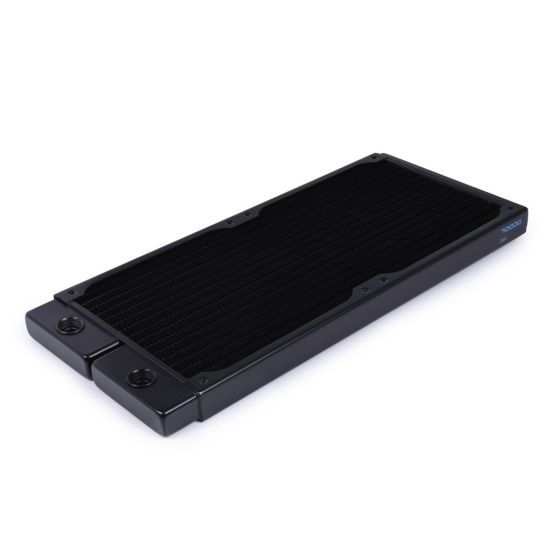 Alphacool has been dominating the market with the NexXxoS Full Copper radiator series for more than a decade. The extensive portfolio of radiator variants is unique in the world. Just like our manufacturing process, which enables us to manufacture all water-carrying parts and the cooling fins from pure copper. The NexXxoS series thus achieves the highest thermal conductivity of all radiators on the market. With their incomparable performance, the radiators can easily dissipate even extremely high waste heat and have become indispensable in many areas of the cooling industry.

The next step in evolution: NexXxoS HPE Full Copper Radiator!
The NexXxos Full Copper HPE Radiator uses the same materials as the previous NexXxos models, but technically goes one step further. Due to the compressed internal structure, the number of water channels and copper fins could be increased. This means that a larger volume of water is in direct contact with the cooling fins and heat transfer is improved enormously. Due to the higher number of fin rows and their shortening, the cooling surface is also used much more efficiently. Comparative tests with the conventional NexXxos radiator have shown that a performance increase of 4.5K is possible when using the HPE radiator.

Space- saving & flexible in use
The compact slim radiators can be installed very flexibly even in the narrowest housings due to their low height of only 20mm.

Connection options & installation
The NexXxoS HPE radiator has an IN and OUT connection with G1/4" thread in the area of ??the antechambers. All screws for mounting in the housing and for mounting the fans are included with the radiator. Additional screws are usually not required.

Details
Write Your Own Review
Only registered users can write reviews. Please Sign in or create an account
Featured
Best Sellers