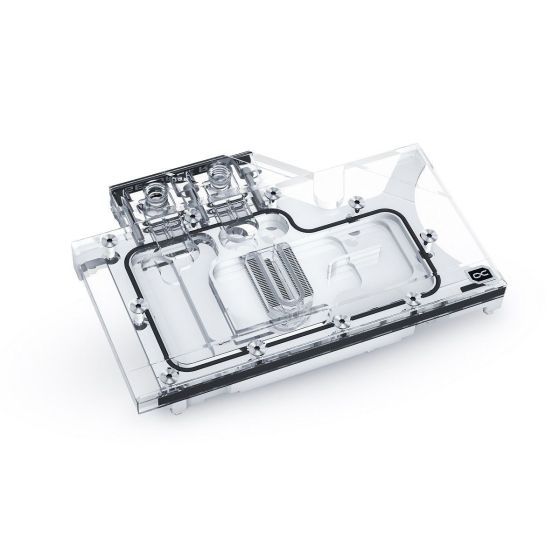 The Alphacool Eisblock Aurora Acrylic GPX graphics card water cooler with backplate combines style with performance. Extreme cooling performance and an extensive digital RGB lighting characterize it. Experience and technical know-how from more than a decade have gone into the development, without making any technical compromises. The Eisblock Aurora Acryl GPX is a significant evolution of the previous Alphacool graphics card water cooler, which has been improved in every area.

More performance!
During the development of the Eisblock Aurora Acryl GPX graphics card water cooler, emphasis was naturally placed on increasing performance. First, the cooler was brought closer to the individual components by reducing the thickness of the heat conducting pads. Next, the nickel-plated copper block was also made thinner. Step 3 involves the constant optimisation of the water flow within the cooler. The result: All important components such as voltage converters and RAM are cooled much better and more effectively by the water and the cooling performance increases significantly.

Brilliant design!
The addressable digital aRGB LEDs are embedded directly in the cooling block and run along the sides of the entire cooler. The effect is an illumination that engulfs the entire cooling block. No corner or edge is left unlit by the aRGB LEDs. The new design is more angular, with all edges bevelled. The result is better light diffusion in the water cooler due to the reflections on these bevels. They also create various contours that give the Eisblock Aurora Acryl GPX cooler its very own visual touch.

Copper or aluminium?
Alphacool only uses copper in its water coolers. In the case of the Eisblock Aurora Acryl GPX, the copper is nickel-plated. Compared to the previous models, however, Alphacool has once again improved the type of nickel plating, which has significantly increased the acid resistance. This should prevent the nickel plating from flaking off. Why does Alphacool use copper instead of aluminium? Copper has almost twice the thermal conductivity of aluminium and is therefore clearly the better material for water cooling.

Other special features
The Eisblock Aurora Acryl GPX GPU cooler has the patented screw plugs, which sit flush with the surface of the terminal. The Alphacool logo sits in the corner on the top and is also fully illuminated. On the front of the terminal, corresponding designations of the compatible graphics card manufacturers can be seen. Of course, these are also fully illuminated by the adressable digital LEDs. IN and OUT are marked by small discreet triangles. They are easily recognisable and fit perfectly into the overall visual line of the graphics card water cooler.

Note on application
Please use only in conjunction with clear transparent water cooling fluids. The particles and additives in Pastel liquids can clog and permanently damage water cooling products such as radiators, pumps, coolers and hoses. This can result in voiding the manufacturer's warranty as well.