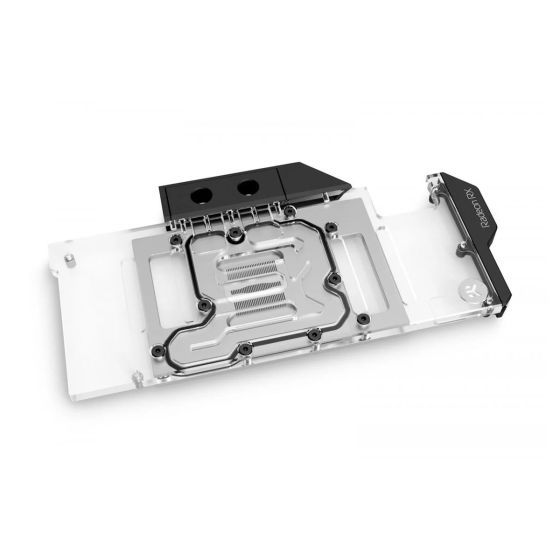 EK-Quantum Vector RX 6700XT is a 2nd generation Vector GPU water block from the EK® Quantum Line. It is made for graphics cards based on the latest AMD® RDNA2™ architecture. This water block fits most reference PCB designs of the Radeon RX 6700XT GPUs.

EK-Quantum Vector RX 6700 water block is compatible with most reference design Radeon RX 6700 graphics cards. The Vector water block directly cools the GPU, VRAM, and the VRM (voltage regulation module) as a cooling liquid is channeled right over these critical areas. The water block is in contact with power stages as well as Inductor chokes to maximize cooling and minimize the chances of coil whine.

These newly developed water blocks feature optimized flow paths that reduce hydrodynamic instabilities and vortexing (dead spots) inside of them. The EK-Quantum Vector Series water blocks use an Open Split-Flow cooling engine design, which proved to be a superior solution for GPU water blocks. It is characterized by low hydraulic flow restriction, meaning it can be used with weaker water pumps or pumps running on low-speed settings, and still achieve top performance. The jet plate and fin structure geometry have been optimized to provide even flow distribution with minimal losses and optimal performance when used in any given coolant flow orientation.

The base of the block is CNC-machined out of high-grade nickel-plated electrolytic copper, while its top is CNC-machined out of glass-like cast Acrylic. These 2nd generation Vector GPU water blocks also feature acetal terminals. The watertight sealing is ensured by high-quality EPDM O-rings, while brass standoffs are already pre-installed and allow for a safe and easy installation procedure.

The aesthetic end-piece is housing the addressable D-RGB LED strip. This water block is compatible with popular RGB sync technologies from all major motherboard manufacturers. The arrow marking on the 3-pin D-RGB LED connector is to be aligned with the +5V marking on the D-RGB (addressable) header.

Use Promo Code Cables30 at Checkout