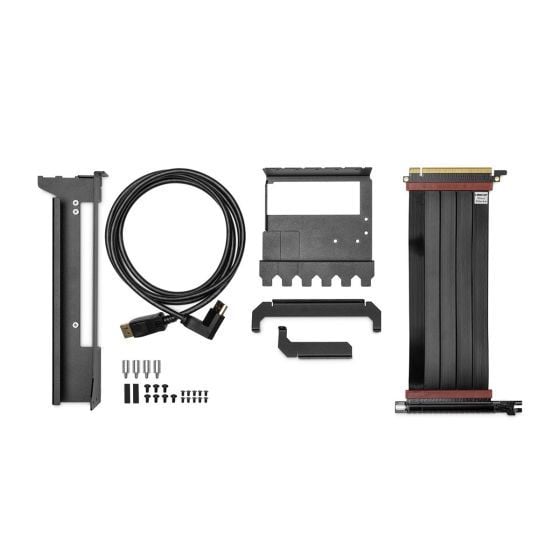 EK-Loop Vertical GPU Holder EVO - Gen4 Riser (shifted) is a steel mounting bracket with a PCIe 4.0 riser cable that enables the user to mount the GPU vertically and show it off. Displaying your water-cooled graphics card or, alternatively, a GPU with a standard massive air cooler has become more and more popular over the years. One way to do this is to use the special aftermarket brackets that allow mounting the GPU vertically if the case is not already equipped with vertical PCIe slots. This bracket does not require open-design PCIe expansion slots.

However, the user often faces issues with how these solutions work since they don't offer enough support, allowing the GPU to move around, sag, and stay crooked. This can significantly impair the aesthetics of said PC, which is a major problem as improving the looks is the primary purpose of this bracket. Things can be even more challenging with liquid cooling, especially when installing fittings and tubing to a vertically placed GPU. Not to mention trying to ship a PC with a vertically mounted GPU.

Made of 1-1.5mm thick black coated steel, the EK-Loop Vertical GPU holder EVO - Gen4 is keeping your hardware safe and immovable even during transport or installation of tubing and fittings.

The premium-quality PCIe riser cable in this vertical bracket is 200mm long allowing plenty of leeways no matter how big your case is. Most other solutions that provide a PCIe 3.0 cable cause issues with PCIe 4.0 motherboards coupled with gen4 GPUs. The EK-Loop Vertical GPU Holder EVO, on the other hand, provides a fully certified gen4 riser cable that is rigorously tested with both the RX 6000 series AMD® GPUs and RTX 30 series NVIDIA® GPUs. Although this is a true PCIe 4.0 riser cable, it is also 100% compatible with PCIe 3.0 standard.

An upgrade to the original Vertical GPU holder is the option to offset the mount, providing additional space for the radiator at the bottom of the case or allowing you to mount a 3-slot GPU. In this raised position, the GPU Holder may support 3-slot GPUs because the GPU clamping part of the Holder is raised above the PCIe bracket holder in the PC chassis. You still need to double-check and ensure there will be no overlapping of the I/O ports or interference of the GPU with the CPU cooler.

EK-Quantum Vector Active Backplates ARE compatible with this product.

Unlike the regular version, the shifted one does not require open-design PCIe expansion slots. This means that even if you have horizontal bars between PCIe expansion slots on your case, this bracket will work.  Each Shifted version is delivered with a special angled 1.8-meter long Display Port cable that is DP 1.4 compatible.

Details
Write Your Own Review
Only registered users can write reviews. Please Sign in or create an account
Clearance