Water Cooling Components - Monoblocks and Others

Yup -There’s a water block for that. 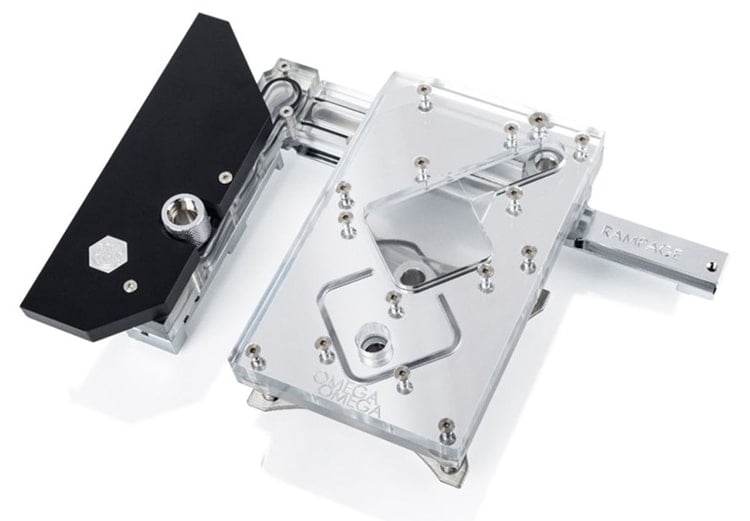 A modern PC produces heat from a lot of different places. Some are obvious, some are more obscure. Some get hot enough to need active cooling, while some others are cooled simply by the air flow in the PC. Many of us decide to water cool those anyway.

Typically called VRMs, voltage regulator modules make sure that the voltage going to the sensitive parts of your electronics stays within a specific range. They suppress electronic noise and power surges and feed your electronics a nice clean steady supply of power to do their job. The process generates heat, which is normally carried away from the component by an air-cooled heat sink.

The VRMs on a motherboard are found next to the CPU socket and most modern boards will have extravagant-looking heat sinks mounted to them. While these heat sinks typically work well enough, water cooling is always more efficient. A few manufacturers actually offer versions of their motherboards with VRM water blocks preinstalled. 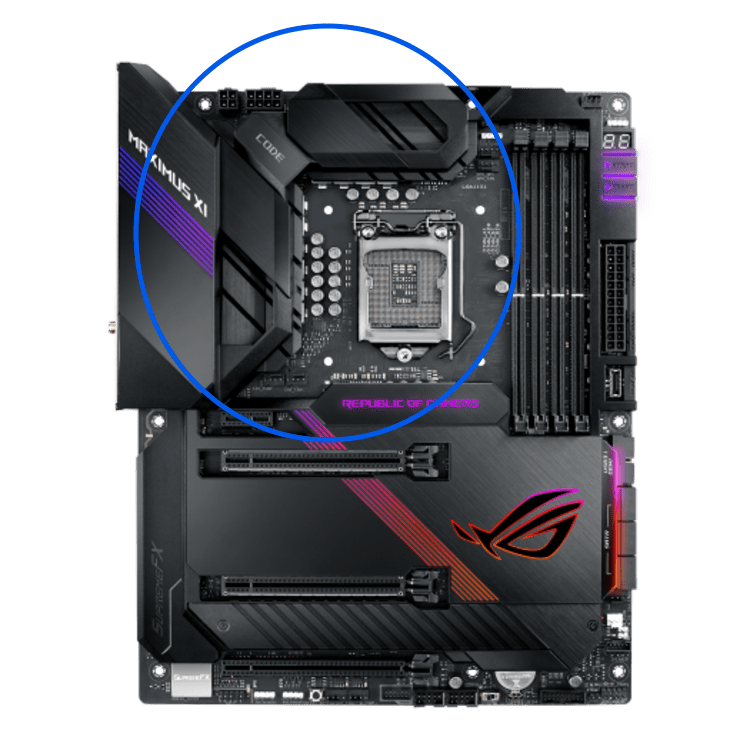 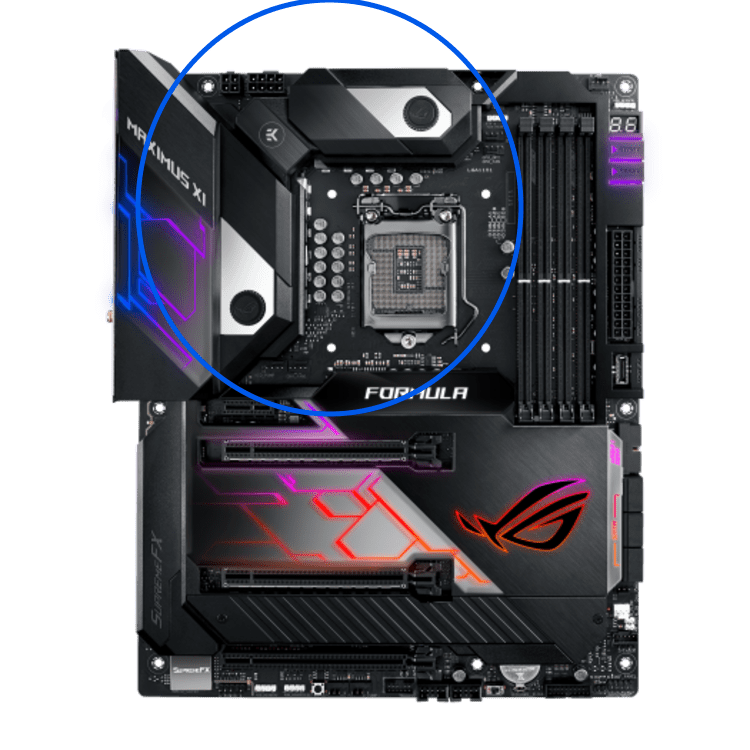 The size and shape of a motherboard’s VRM set will differ based on the board, so a universal solution in a water block isn’t possible. Like choosing a water block for a CPU or GPU, fit must be taken into account. Typically the dimensions involved are the width of the VRM array and the spacing of the mounting holes used for the heat sink. 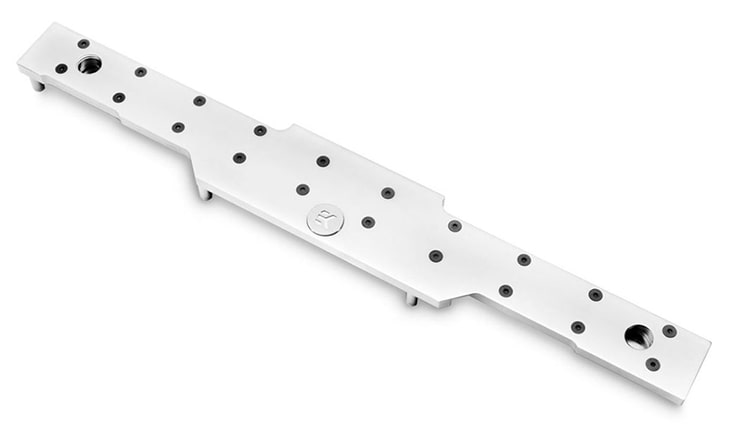 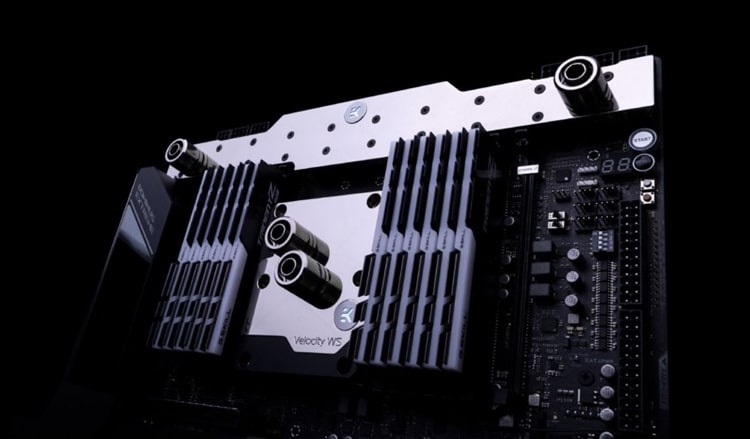 There are water blocks with fixed mounting methods that are designed to fit a single dimension only. These are purpose-made and rarely work in positions other than the one they’re made for.

Other VRM water blocks have adjustable mounting brackets to make them more flexible in their installation. Some even offer interchangeable bottom plates of different sizes to accommodate different VRMs with a single block. 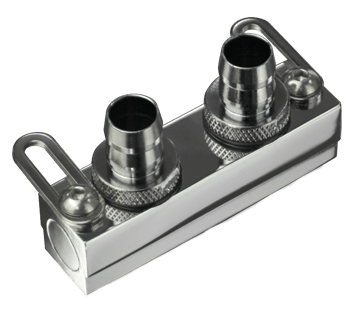 The VWB-C1 adjustable VRM water block from Raijintek. The mounting system on this block will fit many different applications.

Another way of cooling the voltage regulators is known as a monoblock. 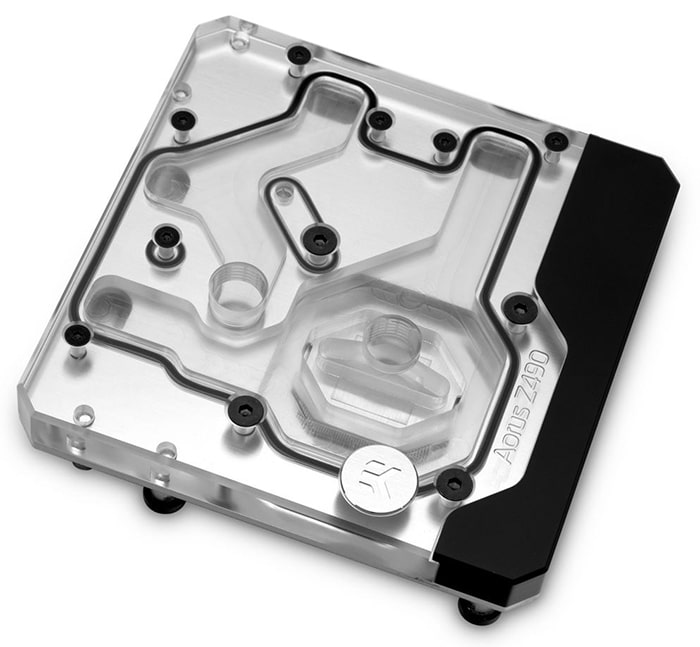 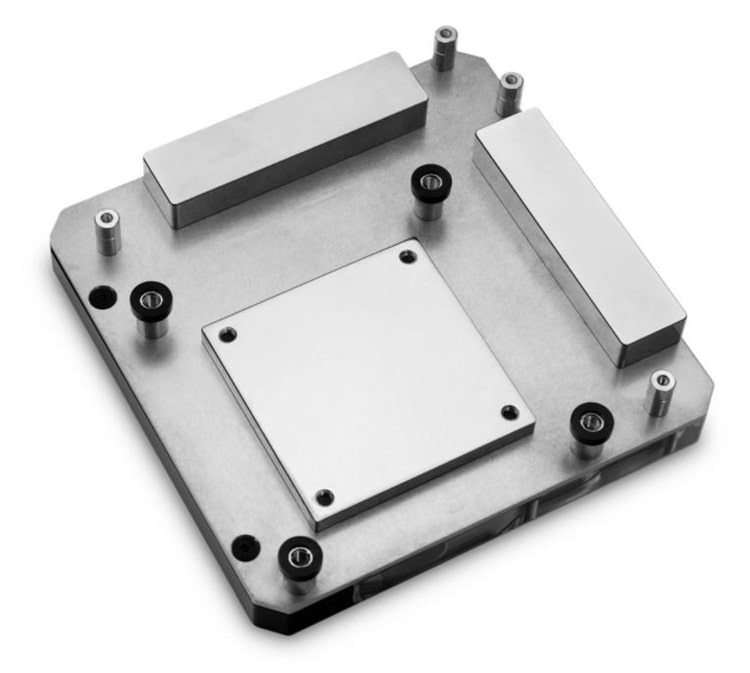 EK’s Quantum Momentum Aorus Z490 Master monoblock. Note the underside is machined to contact the VRMs on the motherboard.

Monoblocks are combination water blocks – they cool not only the VRMs but also the CPU. Essentially an oversized CPU water block with extra space machined to contact the voltage regulators, monoblocks are always made to fit a specific motherboard.

As with VRM blocks, a few brands offer their boards with a monoblock preinstalled.

If you look at a motherboard you’ll typically see two large heat sinks – the VRM heat sink we mentioned at the top and a smaller heat sink on the lower portion of the board. These heat sinks serve to cool a component called the chipset. This hardware normally controls communication between the different components on the motherboard.

Bitspower monoblock for MSI’s MEG X570 Godlike motherboard. Note the extended cooling block on the bottom for the chipset.

Universal chipset water blocks are similar to the universal GPU blocks that we looked at in our last installment. Typically small copper blocks with two threaded ports, they will normally offer flexible mounting solutions to work with a wide range of boards.

Today’s memory modules are amazing examples of energy efficiency. They handle vast amounts of data transfer at mind-boggling speeds without generating a lot of heat. Unless you’re into overclocking your memory or have essentially zero air flow in your case, your RAM won’t need extra cooling.

Thankfully, “need” isn’t always a consideration. Many of us are into the water cooling scene for its aesthetics, and manufacturers know what we want. Water blocks to cool your memory are available from several different brands and come in sizes to accommodate two, four or six memory modules.

It’s important to note that RAM water blocks will not mount to most stock memory. They rely on aluminum mounting plates that attach to your memory modules. These require you to remove the stock heat spreaders on your memory and are almost always sold separately.

Copper RAM water block from XSPC. This is only the block itself – special heat spreaders are needed to mount it.

Today’s data storage solutions are many and varied. From the tried-and-true mechanical hard drive to SATA-based solid state drives to the newest m.2 storage, there are a lot of options to keep your data safe. Thankfully, we can use water to cool all of them.

The three primary forms of data storage in use today: mechanical hard drives, SATA solid-state discs and m.2 sold state disks. Water blocks are available for all of these.

M.2 solid-state drives are quickly becoming the standard in data storage. Roughly the size of a USB flash drive and boasting massive storage capacities, these drives mount directly to your motherboard, eliminating the clutter and latency of cables and providing the fastest data throughput possible.

These amazing devices do get hot though, and while there is a huge variety of heat sinks available for them, there are water blocks for these too.

An air-cooling heat sink for an m.2 SSD from EK.

Even if your motherboard doesn’t boast m.2 slots, there are adapters made that will not only connect your m.2 drive directly to a PCI express slot but cool it with a built-in copper water block.

Left: A water block for 3.5” mechanical hard drives  Right: Aquacomputer’s KryoM.2 is not only a water block for m.2 SSDs but also an adapter that lets you use an m.2 SSD in a standard PCIe slot.

Mechanical hard drives and the larger SATA SSDs are some other examples of heat sources that don’t really need to be water cooled, but that we can water cool anyway. Water blocks for these are either cage-type setups that mount in drive bays or large flat blocks that mount directly to your drive.

Water cooling has come a long way since I got started with it. Today not only do we have all of the cooling options we talked about here, but manufacturers are making water blocks for us to do whatever we want with. Alphacool’s microSW-X DIY blocks are an excellent example.

This block is simply a small POM terminal with two G-1/4 ports mounted to a solid copper bottom plate. It’s meant to be cut down to the size and shape needed by the user, and spare bottom plates are even available. With a setup like this we can cool anything we can stick that base onto.

Alphacool’s extremely flexible microSW-X DIY water block lets you cut the copper base down to whatever size and shape you need.

What all of this tells me is that we can use liquid to cool just about anything - whether it needs it or not. Between water blocks made for a specific purpose and blocks made to be altered to your needs, someone out there in the water-cooling industry has you covered.

This installment completes the water blocks portion of the Components Series. We hope it’s been informative and maybe even sparked some new ideas with some of our readers.

Check back with us next time as we continue the Component Series with a detailed look at radiators.