Welcome back to the Component Series. We hope to help builders both new and old to understand their options when it comes to the components in their custom water loops. Today’s entry is about GPU water blocks.

While the CPU water block is the most common type of block used by water coolers, it’s not far ahead of blocks for your graphics card. More people are choosing to use liquid to cool their video cards – understandable given the massive heat output of today’s GPUs.

While the points to consider in purchasing your new GPU water block are largely the same as the ones we covered on our CPU water blocks guide, there are a couple of important differences.

There are two different kinds of GPU water block: universal and full-coverage. As with anything, there are pros and cons to both and choosing a type is the first step in getting the right water block for your PC. 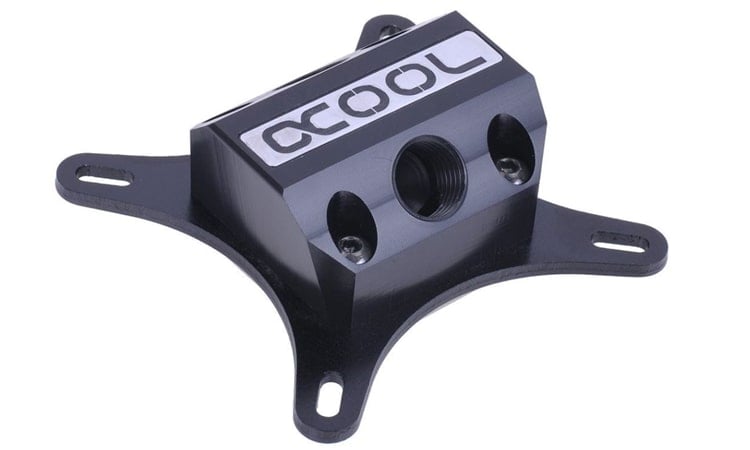 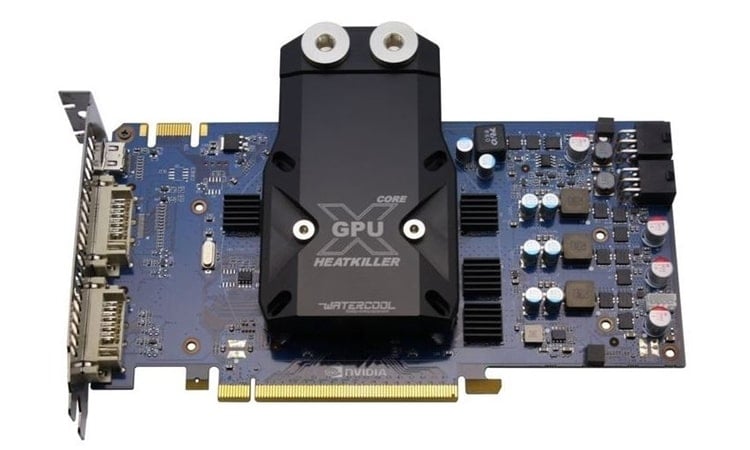 Universal GPU blocks are virtually identical to the blocks we use to cool our CPUs. Typically smaller than a CPU water block, a universal GPU water block mounts directly to the processing die on your graphics card and keeps it cool.

The two biggest advantages to a universal water block are ease of installation and compatibility.

Since it only cools the GPU itself, a universal water block typically installs with only four screws and thermal paste. It also offers flexibility in its mounting methods to make it compatible with many different cards. That means that when it’s time for an upgrade, it’s entirely possible that the block will fit your new card also, saving you the cost of buying a new water block.

The primary disadvantage of a universal water block is that it only cools the GPU. Since there are other components on a modern video card that need to be cooled, heat sinks will normally have to be applied to those components so keep them cool, and air flow around the card is a lot more important than it is with a full-coverage block.

Other issues to be aware of with universal GPU water blocks are appearance and selection – there are only a few on the market. 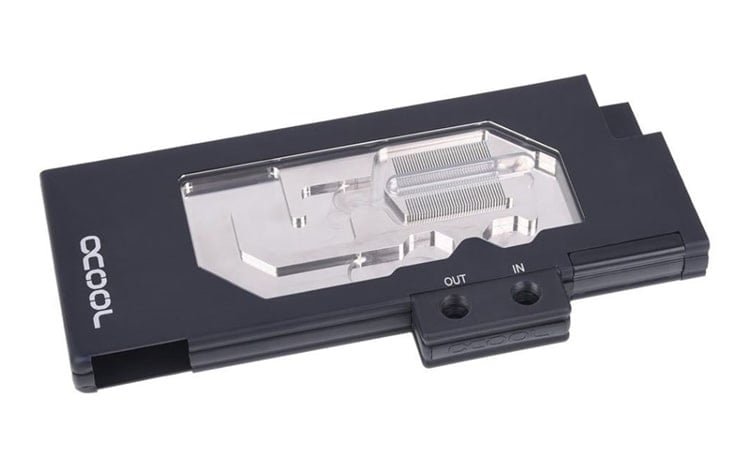 Full-cover water blocks cool not only the GPU but all the other heat loads on the graphics card like memory chips and parts of the voltage regulation system. While a “full-coverage” block may not physically cover the entire graphics card it will cover all the components that it’s designed to cool.

The drawbacks to these more effective cards are the same as the advantages of the universal blocks: installation and compatibility.

Installing a full-coverage water block is a much more complicated task than installing a simple universal water block. While thermal paste is used for the GPU die like a universal block, thermal pads of a specific thickness are normally used between the water block and the secondary components. These have to be placed in the right positions on the graphics card prior to installation of the GPU water block, and mounting the block can involve a dozen screws or more.

Since full-coverage water blocks are made to fit a very specific component layout, they are almost never usable on your next upgrade.

Copper and aluminum are always used for the base plate on water blocks, no matter what they’re for. The copper may be nickel-plated for corrosion resistance or left bare.  The rest of the water block can be made of any combination of several materials. Looking back at our blog on CPU water blocks, these are: 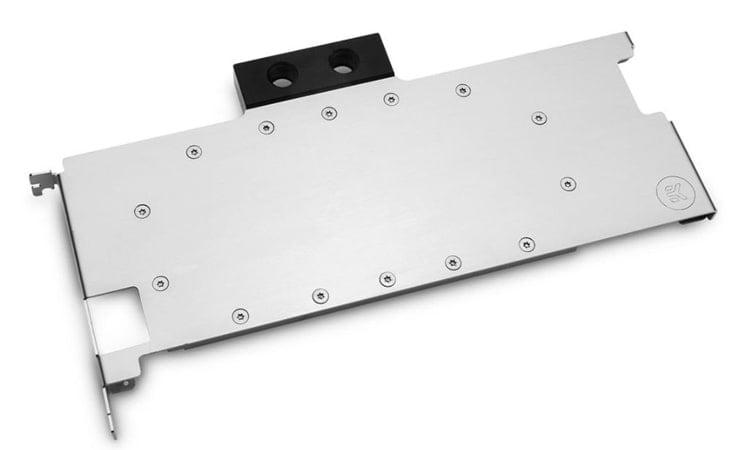 An acrylic water block lit with RGB LEDs.  Acrylic is the material of choice for full lighting options. 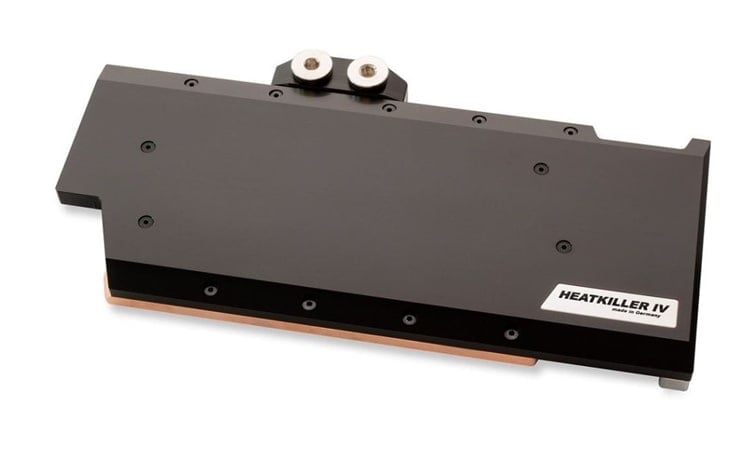 A clean-looking acetal water block from Watercool.  This is an example of a GPU water block that can’t be illuminated. 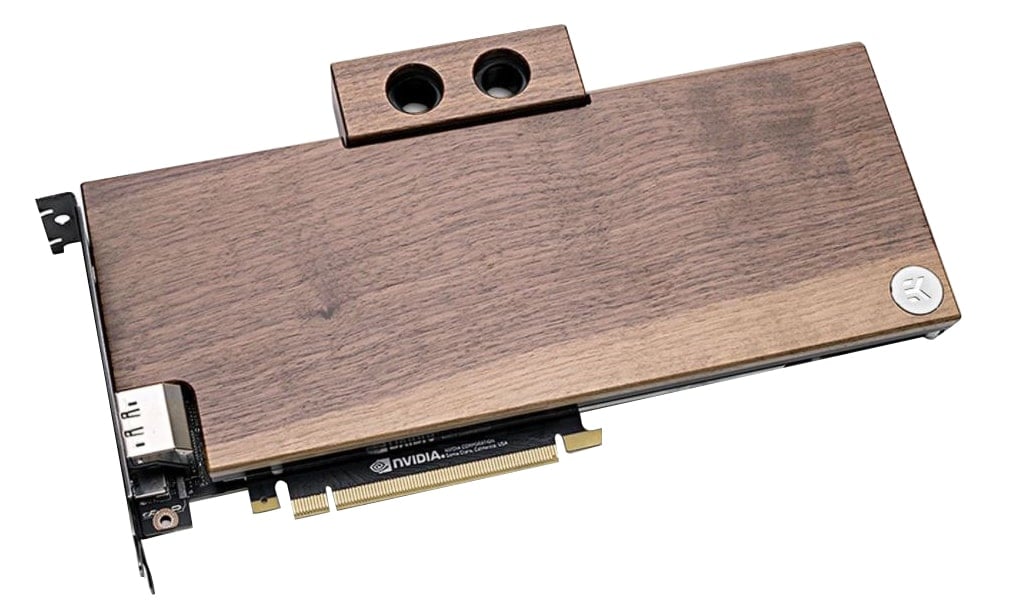 EK’s Lignum full-cover water block for the 2080Ti.  Made with American walnut, it offers a unique appearance.

One more material has recently come to the retail market: wood. EK offers a version of their RTX 2080 Ti GPU water block with a cover made from a solid piece of eastern American walnut. The advantage of this unique material is of course its appearance.

The disadvantages to wood are compatibility (it’s currently only available for a single graphics card) and the same lack of illumination options found with metal or acetal.

Since a universal water block cools only the GPU die itself, it’s typically easy to find one that fits your needs. A list of supported cards will normally be included in the product description. If not, checking the fit is as simple as finding the spacing of the holes on the mounting hardware and comparing it with the mounting holes on your card.

Finding a full-coverage water block that fits your video card can be one of the most complex tasks in your entire liquid cooling build.

Unlike the simple flat face of a CPU or GPU die, the surface of a graphics card is a complex landscape of capacitors, voltage regulators, memory chips and other bits of technology that make it work.

All these pieces are in different locations and are of different heights. That means that a water block for a given card has to be precision machined in three dimensions to both cover and contact the parts that it cools and to avoid the parts that it doesn’t. 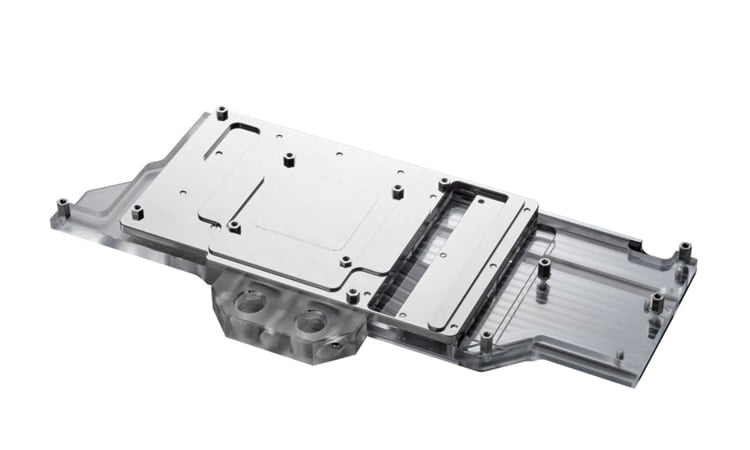 The back side of a full-coverage GPU water block is shaped specifically for the components on the card it was manufactured for.

Installing the wrong full-cover water block on a video card can destroy it.

When a new generation of graphics card is released, it is typically made available first from the manufacturer – either AMD or Nvidia. These initial cards are known as “reference cards”.

Reference cards have all their components in standardized locations and patterns, allowing water block manufacturers to create water blocks with the correct dimensions to fit these cards correctly.

After a period of time, new-generation cards are released by OEM partners like Asus, Gigabyte and MSI. While some of these cards will be reference cards with coolers added by the OEM, many will have a completely different layout in their components, or different components that are larger or smaller than the ones used in the reference cards. Reference water blocks will not work with these cards.

To make it even more complicated, some OEMs will offer several variations on a single generation of graphics card. Some may have different amounts of memory or different power connectors. Each of these could very well need a different water block to account for these differences.

All these have to be taken into account when purchasing a full-coverage GPU water block.

So how do you know if a GPU water block will fit your graphics card?  Product compatibility should be listed with the product description. If not, many manufacturers make compatibility listings available.

Note: Prior to the recent release of the Nvidia’s RTX 3000 line, the first reference cards to be released were called “Founders Edition” cards. In terms of water blocks, these cards were interchangeable with reference cards.

No more. The Founder’s Edition of the RTX 3000 line is a completely different card from their reference cards and water blocks have to be chosen accordingly.

EK’s Founder’s Edition water block for Nvidia’s RTX 3080 and 3090 cards.  Note the input and output ports are on what will be the front of the card when installed.

Like any other component, there are some that perform better than others. Most of what makes a particular GPU water block outperform others is unseen, so you’ll have to research a specific block to see how it performs for others to know if it’s right for you.

While most GPU water blocks will perform their function well, some will give you an extra few degrees toward the absolute best temperatures possible if that’s your goal.

Just like CPU water blocks, the decision comes down to what you’re looking to achieve. If appearance is as important as performance in your PC, you may well end up with a different water block than you would if you were trying to achieve the best possible performance.

A semi-active backplate from Aquacomputer.  A heatpipe leads from the backplate into the terminal where it’s cooled by the passing fluid.

Aesthetic options for GPU water blocks are as varied as they are for CPU water blocks. On top of all the material options and lighting options there are styling considerations. Each brand has its own style, and with the number of brands out there you’re sure to be able to find a GPU water block that fits the feel of your custom PC.

One of the most common decisions in the aesthetic side of GPU water blocks are backplates. Depending on how your graphics card is installed, the back side of the main circuit board will be visible and a lot of people don’t like the look. A lot of GPU manufacturers provide a backplate to hide this part of the card and provide a better appearance but installing a water block on your GPU typically requires removal of stock backplates.

EK’s actively cooled backplate has its own waterblock mounted on top of the memory chips on the card, proving backside cooling.

This factor really needs no explanation. Most of us have to work within a budget, and cost is often what determines the parts we can consider for the other deciding factors.

Of course, if you find a GPU water block that’s good enough in one of the other factors, budgets can be changed.

A note on multi-card setups.

Nvidia’s SLI and AMD’s Crossfire systems allow the use of multiple graphics cards in a single PC.  If you plan to run multiple water-cooled video cards, you’ll need a way to connect them in the water loop.

A solid bridge from Alphacool.  This example is made for the smallest spacing possible.

A solid bridge is a single block of material, usually acetal or acrylic, that’s made to mount onto two or more graphics cards in place of the original port terminal.  These are made for specific spacing based on the layout of your motherboard’s PCI-express slots, so be sure to check which slots your cards will be installed in to get the right bridge.

Bitspower adjustable link fitting.  This example adjusts from 41 to 69mm.

Adjustable link fittings are used to connect the factory port terminals between two water blocks.  They’re a two-part fitting that offers an adjustment range dependent on their size.  The inner tube of the fitting slides in and out to adjust its length.

Adjustable link fittings are a better option than solid manifolds if you’re not certain of the distance between your cards or in special situations like mods where the distances are non-standard.

With the amazing variety of GPU water blocks on the market today, chances are you can find one that fits checks all the boxes and fills that spot in your custom PC perfectly.  If you’re planning your entire custom PC and not simply a water cooling loop for what you already have, purchasing a graphics card with a reference design will make choosing a GPU water block much easier.