There are PC builders out there that can put a system together, check its function to make sure everything is running smoothly, and then use it without ever looking at its vital signs again.

I am not one of those people.

Temperatures, clock speeds, voltage readings, load percentages, throughput speeds – I want to see all the data I can, in real time.

If you’re a stat-checker like me, you’ve likely seen external system monitors in custom systems. If your available time for tinkering is like mine, you likely still look at those with envy, as getting them installed and set up all on your own takes time and a skillset that many don’t have.

The people at Lamptron have seen the need and responded in a big way.

Founded in Germany in 2005, Lamptron initially focused on fan controllers and lighting, bringing us some of the best examples of both.

Recently though, Lamptron has shifted their attention to PC monitoring hardware. They currently offer more than ten different hardware monitors in different sizes and styles, with more on the way!

First launched as ASMDEMO in 1995 and reintroduced as AIDA32 in 2001, AIDA64 is the culmination of decades of work and improvement and is among the best-known monitoring software packages on the market. The amount of information about your system that’s easily obtainable through AIDA64 is honestly incredible, and Lamptron’s system monitors make it easy to access.

First and foremost, Lamptron’s hardware monitors currently all offer the same user interface and functionality. Powered by a micro USB connection and interfacing with your PC by way of a full-sized HDMI connection, they’re universal and easy to use.

Since they connect through HDMI, Lamptron’s system monitors function as an additional display. While that means that your video source will have to be multi-monitor capable in order to use them, it also makes them simple and eliminates any need for additional drivers.

You will of course need a copy of the AIDA64 software. If you don’t have a copy don’t worry – the flash drive included with your Lamptron monitor includes a fully-licensed copy of the software. Licensing for AIDA64 (as of the date of this post) starts at $49.99US, so this is a nice inclusion.

AIDA64 is capable of monitoring nearly every piece of data about your PC and displaying it on the Lamptron System Monitors. Anything from memory utilization to disk activity to per-core CPU temperatures. Temps, voltages, clock speeds, power values, disk space – pretty much anything you might want to know about what your PC is doing can be monitored in real time and displayed. 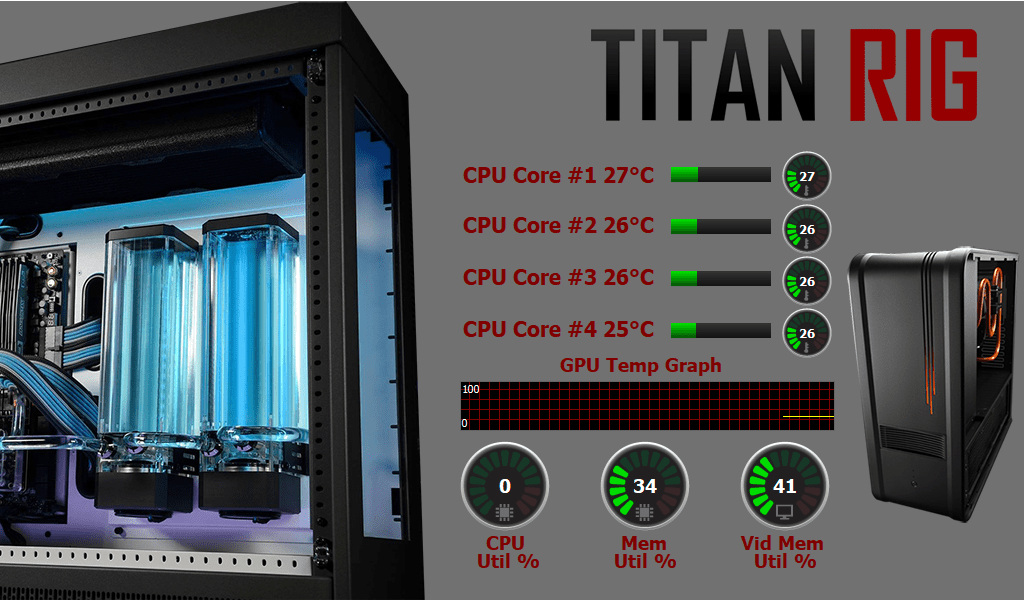 What’s more, AIDA64 allows you to build a completely custom screen for your new monitor. You can decide not only which pieces of data are displayed, but customize the way they’re displayed. Bars, graphs, gauges, simple numbers – the choice is yours. You can customize nearly every aspect of your screen, right down to the color and font used in the different data displays and more. You can add your own images and even make your own custom gauges if you’re savvy with image editing software.

We’ve put together a video tutorial on creating your own custom screen for your Lamptron display.

Now that we know how they work, let’s take a look at the different models available and how they differ. 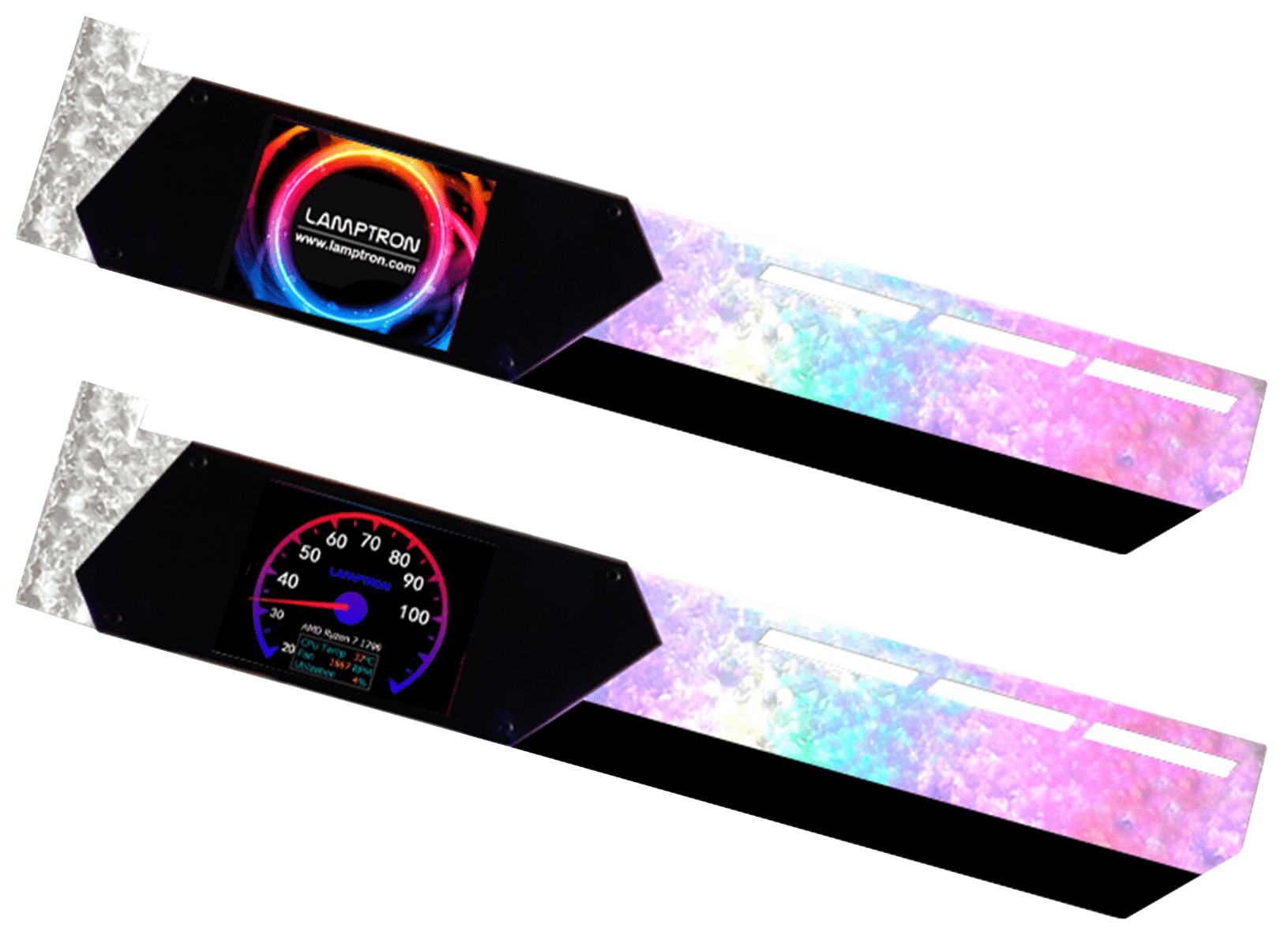 The HM022 is the smallest of the monitors that Lamptron offers, with a diminutive 2.2-inch LCD. Why would you want a monitor with a screen that small, you ask?  Because this one is built into a graphics card support bracket.

You read that right – a tiny system monitor built into a graphics card support bracket. Not only that, it also offers an addressable RGB panel.

The HM022 is unique among Lamptron’s monitors in that it only requires only a USB connection to function – both power and data are supplied. The ARGB function has its own connection, with a passthrough plug to facilitate daisy chaining. 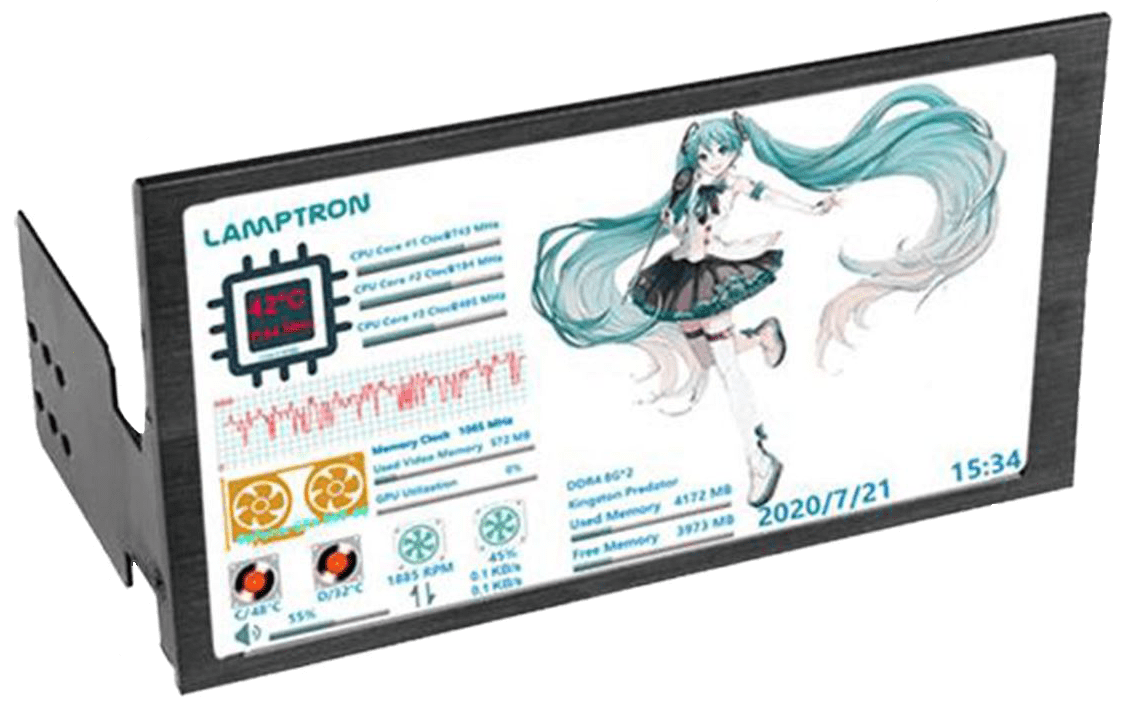 The HC060 monitor offers a six-inch LCD screen and comes with mounts to install in any dual 5.25” position in a PC case. Fully enclosed and only 6mm thick, the HC060 can also be housed outside your PC case, though no mounts or stands are included for this purpose. 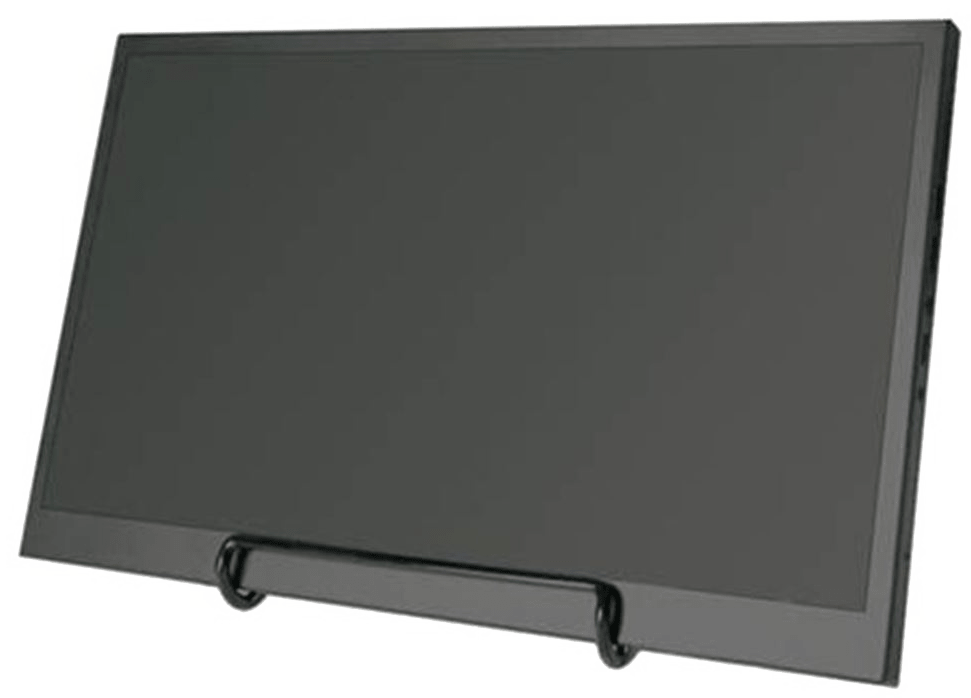 Moving up in screen size brings us to the HC070. Offering a 7-inch screen and matching the 6mm thickness of the HC060, the HC070 is designed to mount in a PCI slot inside your case. 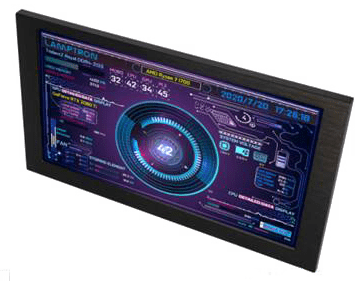 The HM070 monitor is a modification of the HC070. While using the same 7-inch screen, it provides an enclosure 10mm thick that allows it to function freestanding outside of the PC case. It also includes the same mounting options as the HC070. 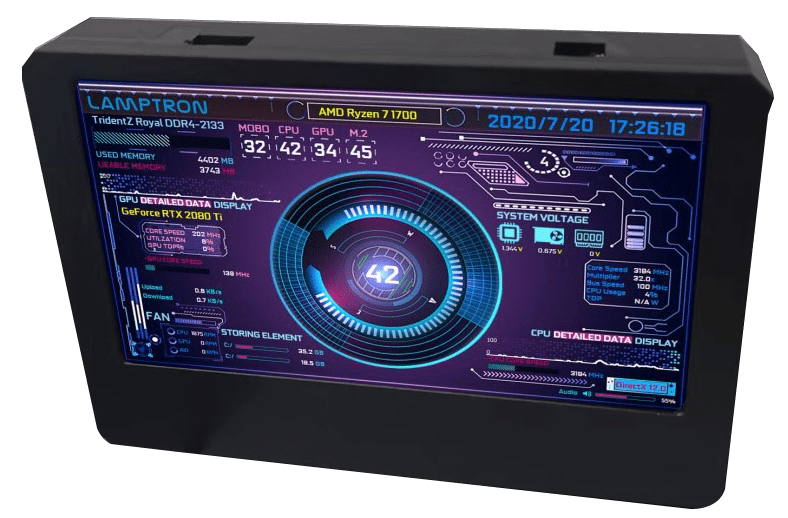 A further modification of the HC070, the HM070 LIFT places the 7-inch LCD screen in a larger housing that’s 30mm thick and includes an option for wall mounting.

Though the screen on the HM088 is an 8.8” LCD, its form factor is longer and narrower than the 070 series. Designed to be mounted inside your PC case in a PCI location, its length will cover a large portion of most side panel windows.

The HM101 moves away from the smaller screens used in previous models, offering a 10.1-inch LCD and includes a single-position stand for placing it on a desk.

The HM101 Touch also comes with a much-improved multi-position stand for ease of use.

Similar to the HM088, the HM140 offers a long narrow form factor, but with a full 14-inch LCD screen. Mounting for inside the PC case is included. While it is 14mm thick, the shape of the HM140 will not allow freestanding use without a stand of some sort.

The HM140 Touch brings a screen identical in size to the HM140, but wrapped in a thicker bezel and including the same multi-position stand that comes with the HM101 Touch. Virtual keyboard support is also present.

The largest of Lamptron’s monitors, the HM173 is a gargantuan 17.3 inches of screen. Sharing the same uniform narrow bezel as the HM101, it also comes a non-adjustable single-position stand.

Lamptron has really stepped up to the challenge with their new line of system monitors. By using AIDA64 as their data connection they’ve made installation simple and given users a huge array of data to choose from when deciding what to display. The sheer variety of size and shape options are amazing, and anyone wanting to get started with a separate system monitor will be able to find something to fit their needs.