Lawrence has built a sleek and elegant system in the InWin 303EK chassis.  By sticking with an all-white canvas he’s able to define the overall look of it with his lighting, or the lack of it.  Obviously a labor of love, it’s a beautiful piece of work and one whose overall style is timeless.

I had the chance to talk with Lawrence about his build.

Does this project have a name?

I haven’t thought of an official name for the PC yet. My first inspiration was to create a “Northern Lights” effect with green to blue lighting. However when I finished the build and was tinkering with the RGB I fell in love with the pink/yellow lighting as it reminded me of the “Cherry Blossoms” season.

What is the PC’s primary use?

This PC became my primary driver starting around February. I use it mostly for gaming (Teamfight Tactics, VALORANT, and yes… Old School Runescape :)) and coding side projects. I’m starting to learn how to do 3D modeling / printing and am hoping my hardware helps make that process smooth!

How long have you been building PCs?

Up until last summer, all my personal machines were prebuilts. I had a short stint in 2013 building mining rigs to follow along the Dogecoin hype so when I started building PCs again it didn’t feel too foreign to me.

How did you get into water cooling?

The first time I saw a watercooled PC was in 2019 when I visited a friend and saw his soft tubed rig built in a Lian Li PC-O11 well lit by Corsair LL120 fans. It was mind blowing, as I never even imagined that computers could look like that. Last summer my 2013 prebuilt (i7-4700k CPU, GTX 770 GPU) was finally starting to feel slow. I decided the time was right to go all out on a water cooled PC build. I had so much fun with my first build in a Lian Li PC-O11 with an EKWB side distro plate that I found every opportunity and excuse to build more rigs. 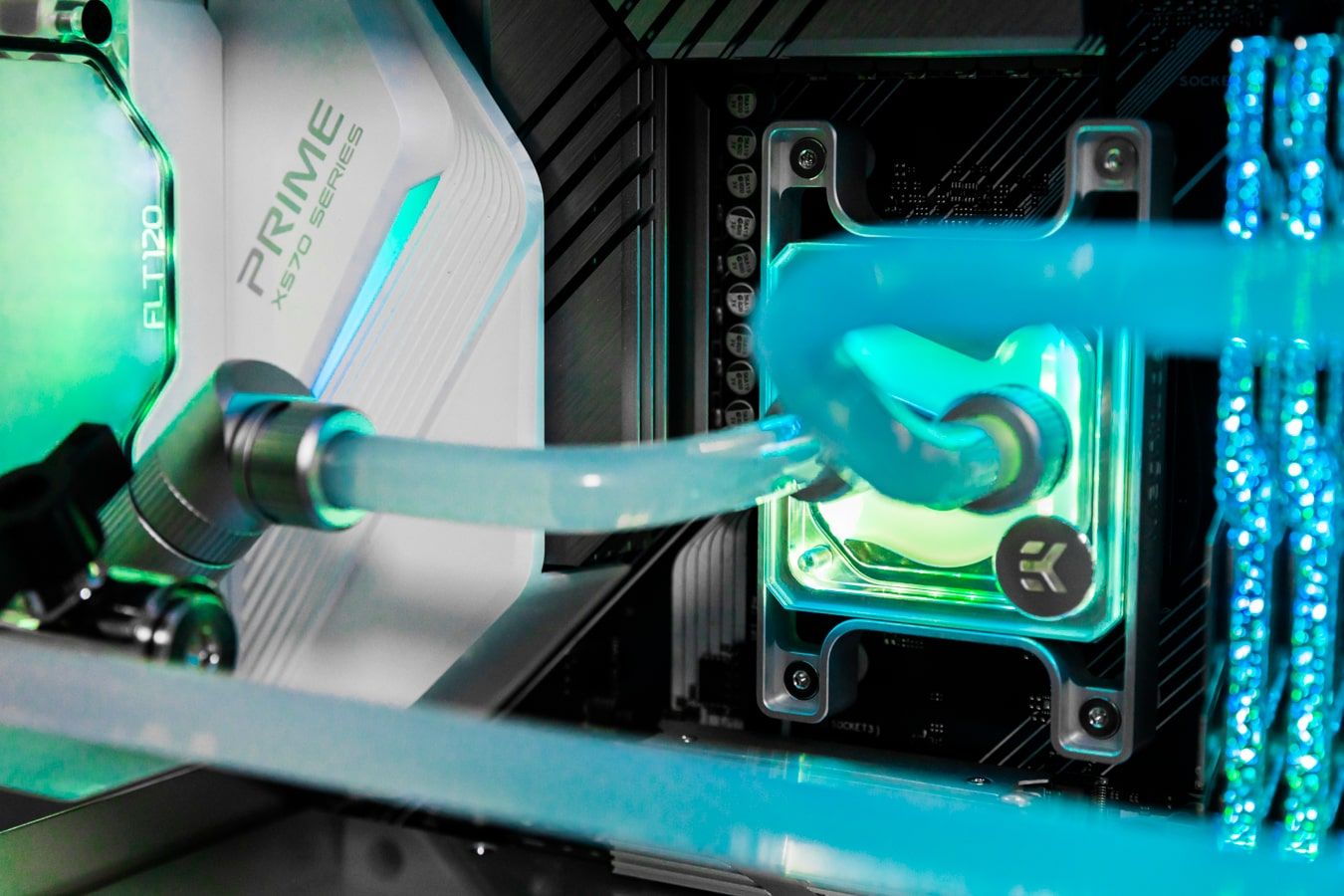 What was your motivation for water cooling this PC?

GGF produces some of my favoritewater cooling content. All his builds are genius. When he posted his InWin 303EK build to what I believe was showcase EK’s new Mystic Fog PC Coolant, I instantly fell in love with case and white aesthetic. I felt the already amazing build could be taken to the next level by removing some more of the black accents and having more intentioned lighting. That’s when I had the inspiration to build a “Northern lights” PC, centering around color gradients on this case’s distro plate & G.Skill’s Trident Royal RAM (which is meant to give an icy effect).

What issues/problems did you run into with this build?

I ran into tons of “learning opportunities” whilebuilding this PC ;). There’s enough that I’ll list them out. Case disassembling - I decided the best way to paint the case evenly is to fully disassemble it and paint each panel. I’ve never modded a computer (or anything) before, so at the start, I had no idea how to approach this. Through some intense google-fu I learned about riveting. I bought a power drill, a rivet gun, and tons of rivets of all different sizes because I had no ideawhich ones I was supposed to use.

The idea of drilling the case was terrifying, butonce I started it wasn’t nearly as scary as I thought. On that note - the power drill was an amazing purchase, and now I understand why it’s a must have in any household. Never have I assembled IKEA furniture as fast!

Case Painting - Painting took way longer than expected. The two biggest issues I ran into was holding the panels up and the debris in the city air. Each case panel was heavy! My arms became ridiculously sore from holding a hooked panel and painting on a layer for 5+ minutes at a time. I ended up painting for almost a week and by the end I was having all sorts of muscle pains. I later watched a video posted by Jayztwocents where he recommended buying a simple metal clothes rack to hang the panels. I tried that method for a later project and it was quite a game changer.

There was no better way to see all the debris we breathe in Los Angeles than trying to paint a PC case panel white and watching it dry. I would spray on a layer, and before the coat had a chance to dry I would see all sorts of black spots stuck on it. Luckily for me it rained later in the week, and once the rain stopped I was able to take advantage of the clean air and get some good results. 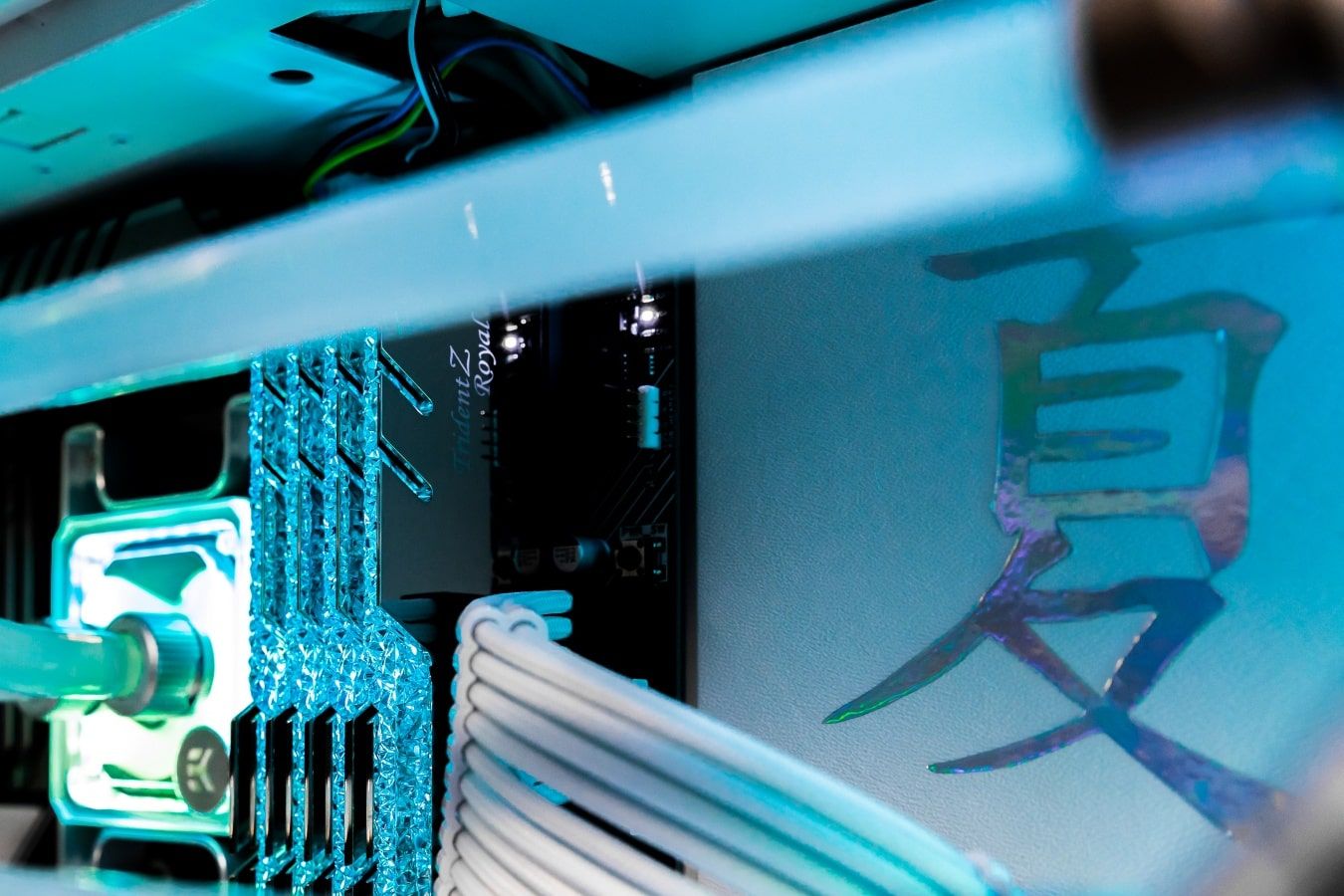 Drain Valve - The InWin 303EK case seems to have been built to only support a top radiator mount. When I put in the bottom radiator I lost access to the drain port. The decision to add an EKWB FLT120 res on the back of the case was a last minute decision to find a drain port. I expect flushing out the coolant on this build will be a bit of a hassle, but I’m sure it’ll be fine.

Motherboard - The original motherboard I bought was an ASUS Rog Strix B550-A. After mounting it in the case and starting to do the hookups I realized it didn’t have a USB 3.1 header and I couldn’t hookup all of my caseheaders. This bugged me so much that I ended up picking up the ASUS x570 Prime Pro. This was a good learning experience for me as motherboard headers previously were not something I considered during parts selection. 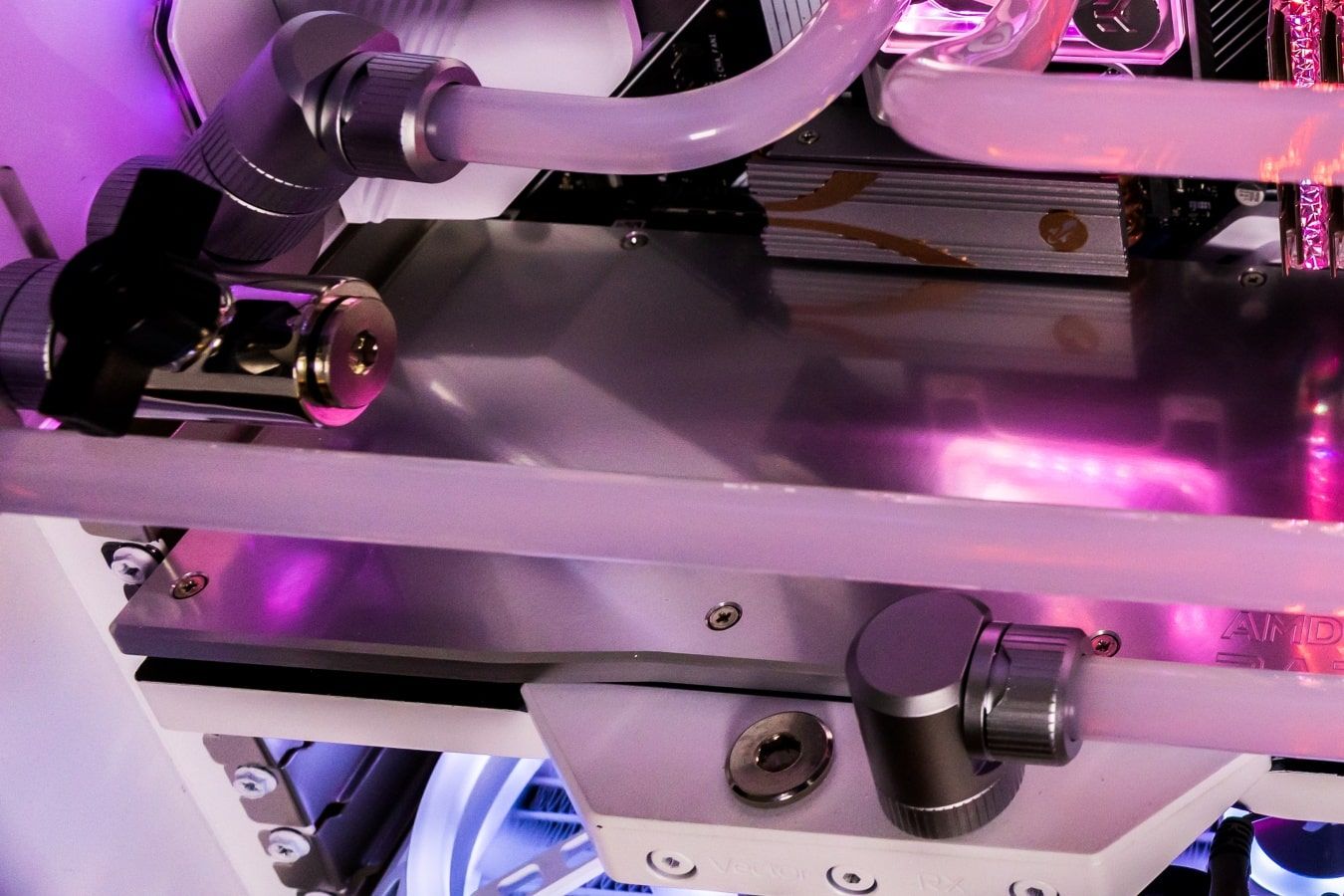 Lighting Software - I’ve been able to make Corsair’s iCue lighting play nice with motherboard lighting before. Apparently it’s a known issue that the ASUS x570 Prime’s onboard RGB controls do not play nice with iCue, resulting in the occasional light flicker. I haven’t had the time to address this yet, but plan on exploring some options around custom lighting software. 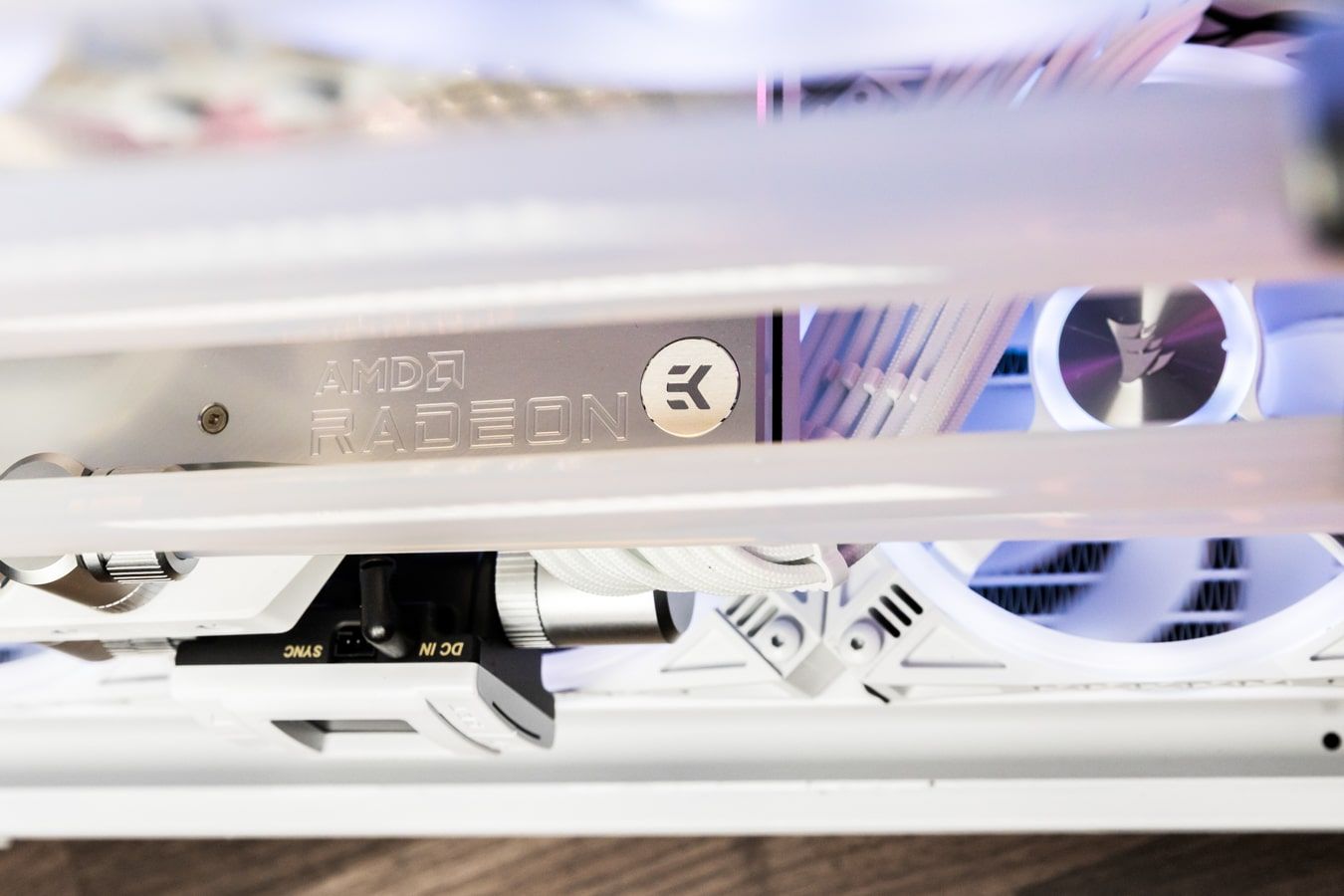 Would you do anything differently if you did it again?

Several things I would have done differently:

I would have tried to have the case professionally powder coated by an auto paint shop. While painting was fun, the patio of a Los Angeles apartment isn’t the most suitable environment to achieve the perfect paint.

Use more clear coat - I accidentally scratched the paint in a couple spots during assembly, which was a bit heartbreaking after all the effort I put in. In later projects I was quite a bit more liberal with my clear coat and didn’t have scratching issues.

EKWB came out with a low profile drain valve recently (available in Satin). I’ve used it on two builds now and I like it a lot. The next time I do maintenance on this PC I will be swapping out the ball valve.

Any advice for the aspiring water cooler?

Yes! I still consider myself very much a novice, but am looking to help get more PC enthusiasts to try out water cooling. My main piece of advice is that it’s not nearly as scary as many folks perceive it to be. All the water cooling components I’ve used have been super well thought out and air tight! The experiences have definitely been worth it.

For some more practical tips that would have helped me the first time:

Use an air pressure tester (e.g. EKWB’s leak tester) on your loop. If your loop is air tight at pressure, you should be confident it will be water tight.

If you’re using rigid tubing - make sure to really soften up your tube before bending. Even after watching countless youtube videos, this didn’t click for me until my 4th build. I now evenly heat my tubes until it starts wobbling under its weight before I start applying any pressure.

Use online resources. There are a lot of youtubers, instagrammers, bloggers, and PC sites that produce amazing content around water cooling. Whether you’re looking for help videos or want ideas for inspiration, there’s someone out there that is sharing exactly what you’re looking for.

This case only comes in black. Your painting skills are way better than mine.  What paint did you use? Any tips to get this kind of results?

I followed all the steps highlighted in a Nvidia GeForce Garage video on case painting. From my experience, it really came down to patience. Everytime I rushed (not giving enough time to dry between coats, painting too fast or too close to the panel, not enough layers) I was punished and had to start over. My other piece of advice is to use a generous amount of clear coat!

I love the characters on the back panel above the cutout for the 24-pin cable. Do they have a special meaning?

Yes! This is the Chinese character for “Xia”, which is my last name. It means “summer”, which is a bit humorous since my original intention was to build a snowy Northern Lights build.

Did you make the custom cables also?

I did not, but I absolutely plan to once I clear my remaining project backlog. I don’t consider this build complete before cleaning up the back. I aspire to be able to make custom cables and do management at the level of AlexBanks one day, but it’ll take some time to get there. I actually bought all my cables and a crimping kit from TitanRig in January, so I don’t really have any excuses :).

That back panel with the cutout for the 24-pin isn’t a stock part – what went into making that?

I made the back panel with a cheap ABS plastic sheet that I bought online. I didn’t have any power tools at the time, so I actually used a pair of kitchen scissors to cut out the shape I was looking for, and then straightened everything out with some sanding. I then spray painted the panel to have the same white color as the case, and drilled two holes to be able to mount it. The Chinese character was also a hand cutout of a Vinyl sticker. It’s quite low tech and low budget!

Thanks for all the info and tips, Lawrence.  You’ve probably inspired some new modders out there.

Its also nice to see how you used decent components I see a lot of pc builders skimp on certain parts really shows you care about what goes into it.

Its also nice to see how you used decent components I see a lot of pc builders skimp on certain parts really shows you care about what goes into it.

The one change I would have made is use ECC memory. Sure, it isn't always as fast as non-ECC, but personally, I prefer stability and reliability over speed, if I have to choose one or the other. I've had good luck with Kingston ECC memory on my Gigabyte X470 board, and this Asus X570 board supports ECC too. Most ECC memory comes as a bare module, so I would have installed an aftermarket white heatspreader. It wouldn't have been as gorgeous as the heatspreader on the G.Skill Trident Z Royal RAM you chose, but again, my preference is reliability and stability before anything else.

But that's just my preference. This is amazing work, and absolutely beautiful.