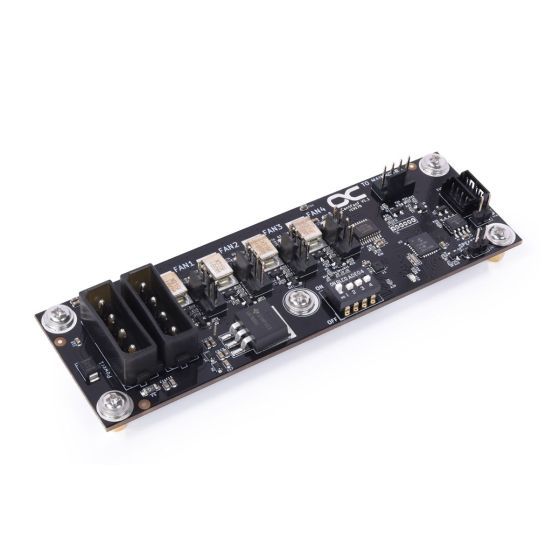 Server and industrial fans have an enormously high power consumption due to their special requirements. For this reason, they can usually only be connected directly to the power supply unit, as the existing connections on the standard mainboards cannot provide the power needed. The problem is that the function of the fans cannot be checked, monitored or controlled via the mainboard. Therefore, Alphacool offers the ideal server solution for industrial fans with the ES Guardian 4Port Powerfan Hub.

How does it work?
The ES Guardian 4Port Powerfan Hub can be placed anywhere in the case using M3x4mm screws and M3x6mm spacers (see mounting example) and connects directly to the power supply using the included power cable. In case the fans used require more than 1.5A (18W) per fan, an additional power connector is provided. It offers the option to connect 4 fans via 4-pin PWM. Finally, the Powerfan Hub has to be connected to the mainboard via 4-pin PWM. Once these steps are done, the 4 fans can be monitored and the speeds can be read out.

Stand-alone operation
The ES Guardian 4Port Powerfan Hub has a 4-way DIP switch. The switch allows to activate or deactivate the monitoring of the fans individually. The speed signal (RPM) is passed from the first active fan to the mainboard via the 4-pin PWM connector. If a monitored fan is defective, no RPM signal is forwarded to the mainboard. If the mainboard supports the corresponding function, an error message can be issued.

Full control
The Powerfan Hub has a speaker port that can be used to connect a piezo buzzer or standard PC speaker. This way, an audible warning signal can also be issued in the event of a fan failure. Control LEDs on the fan connectors also allow visual monitoring.

CAN-Bus connection *
Using the Can connections adds more functionality:
- each fan can be controlled separately
- Temperature and humidity can be read in real time
- Display temperature control and temperature zones
- operating hours counter
- for later stand-alone operation, the control curve for each fan can be saved as a preset

(* The additional functionality is however bound to the use of a corresponding CAN-Bus Controller and the associated software!)

Details
Write Your Own Review
Only registered users can write reviews. Please Sign in or create an account